An intriguing documentary tracks the Berlin Wall across America 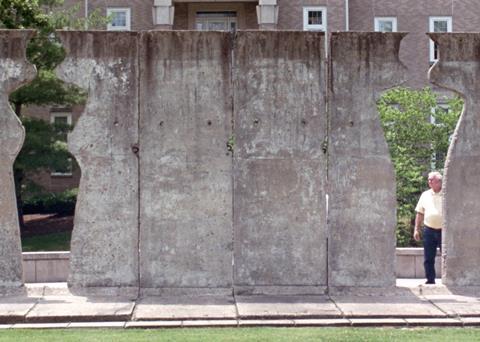 A towering physical symbol of oppression, the Berlin Wall separated the Allied-controlled West Berlin from the Soviet-controlled East Berlin from its construction in 1961 to its destruction in 1989. During that time, it was a menacing symbol of the Cold War threat; its collapse was a powerful promise of freedom. Yet, in their brisk yet profound documentary, filmmakers Courtney Stephens and Pacho Velez argue that, even in the fragments that remain — and they concentrate on over 60 huge sections that are now displayed across the United States — the Berlin Wall continues to cast a long and complex shadow.

“The greatest canvas in modern history”

Premiering in Berlin, The American Sector is an assured, intelligent piece of filmmaking that should capture the attention of further festivals; particularly those with a focus on human or political history, as well as an appreciative audience on streaming or broadcast platforms. Stephens, a shorts director making her feature debut, and Velez, co-director of award-winning documentaries like Manakamana and The Reagan Show, have taken a three-year journey to document the pieces of the Berlin Wall that reside throughout the US, and the results range from the obvious to the surprising.

For every piece of the wall that stands proud in a museum, library or government office, there are others that hunker down in corporate headquarters, metro stations, hotels and restaurants. Some stand, unrecognised and unnoticed, at the side of nondescript roads. There’s even one hidden away behind the Hard Rock Cafe in Universal Studios, Florida.

At some locations we are only treated to a fleeting glimpse; at others, Stephens and Velez speak to officials (mostly on-camera) and tourists (usually off-screen) about their piece of the wall. To some, it’s an essential piece of history, especially the part which lives in the State Department in Washington. Signed by dignitaries and activists who worked to end the Cold War, it represents “a testament to the work of diplomacy”. To British sculptor (and granddaughter of Winston Churchill) Edwina Sandys, who used the wall to create a piece at the Franklin D Roosevelt Presidential Library in Hyde Park, New York, it is an essential public artwork. To individual collector and LA resident Jason Post, it has a cachet as “the greatest canvas in modern history”.

As Stephens and Velez travel from the gleaming homes of LA through the decaying rust belt and the devout bible belt to the country’s eastern shores, the wall comes to represent the seismic divides — race, class, wealth, doctrines — that still exist. For the African immigrant owner of a food truck opposite a panel of the wall in Los Angeles, it speaks about breaking down barriers. In Stony Point, New York, an unseen woman suggests God believes in walls and the importance of individual, patriotic nations. Students at the University of Virginia question the morality of displaying a huge piece of wall, when there’s only one tiny memorial brick to commemorate the slave labour that built the institution. Yet at the Mason Dixon Line in Cincinnati, Ohio, an African American man says that the wall brings hope, reminding him that his people are not alone in being oppressed, nor resisting that oppression.

Effective editing, by Stephens and Dounia Sichov, gives the film its structure. Sometimes the camera merely catches a glimpse through the car window; at others it lingers on the sheer size of each piece. At times it virtually ignores the piece itself, focusing on the pomp or mundanity that surrounds it. Woven throughout is archive footage of the Berlin Wall in-situ — usually playing on museum monitors — which offers historical context, and a sobering reminder that, while it may now be in pieces, its ideological foundations remain intact.