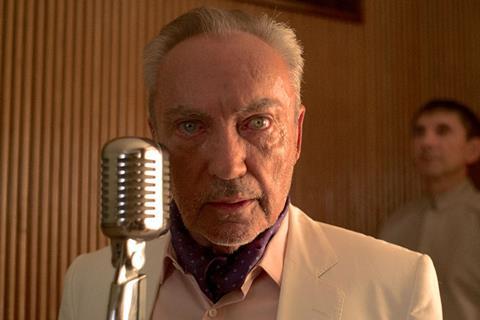 Writing/directing partnership Peter Brosens and Jessica Woodworth continue the turn towards comedy that began with their 2016 award-winning mockumentary King Of The Belgians. Their fifth feature picks up the satirical tale of the hapless monarch where the last film left off and turns up the absurdity to gently amusing effect, although fans of astringent political satire by the likes of Armando Iannucci (The Death of Stalin) and Chris Morris (Four Lions) may find the end result lacks bite. Still, pertinent subject matter and a light touch could lead to further festival interest across Europe after the film’s premiere in Toronto.

Character development is  minimal, with the emphasis more on visual comedy than the semi-improvised scripting

An intertitle recap brings newcomers up to speed with the story so far, which included the collapse of Belgium while the king was on a state visit to Turkey and an impromptu road trip with a British documentarian in tow. Now in Sarajevo and still trying to get home, things are soon in a right royal mess again for Nicolas III, his valet Carlos, press officer Louise and chief of protocol Ludovic (Peter Van den Begin, Titus De Voogdt, Lucie Debay and Bruno Georis respectively, all reprising their roles from the previous film). The king is shot in the ear during a re-enactment of the assassination of Archduke Franz Ferdinand and wakes up in a sanatorium on the Croatian island of Brijuni – once the playground of former Yugoslav dictator Josip Broz Tito – where he discovers the European Union has collapsed and the nationalistic Nova Europa super-state is taking its place.

The absurdity levels are high from the start, as we learn that all the residents of the sanatorium, overseen by the slightly sinister Dr Otto Kroll (Udo Kier, having fun), take on the names of Tito’s former guests – ranging from Richard Burton through to Indira Gandhi and Nicolae Ceaușescu (all based on fact and attested to by archive photos over the end credits). Among them is Lady Liz (Geraldine Chapman), a woman with a tragic past mired in the darker elements of European history. As the continent prepares to announce its first emperor on the island, Nicolas is being urged to take it easy, but he has other plans.

The directors ditch the mockumentary device used in their previous film in favour of more conventional framing from returning cinematographer Ton Peters, but while this allows more freedom in terms of what they can shoot, much of the energy is lost. Character development is also minimal, with the emphasis more on visual comedy than the semi-improvised scripting.

Much is made of the routines of the sanatorium, from the bizarre exotic animal gifts that have outlived Tito to ridiculous tannoy announcements calling residents to everything from fish massages to aromatherapy and a daily exercise regime that involves Nordic walking and trampolining. Part of the therapy includes the patients engaging in bizarre forced laughter sessions, and there’s a sense that Brosens and Woodworth are also trying too hard to wring the situational laughs out of their audience. Popular classics from the likes of Ravel and Rimsky-Korsakov are also used to cue the comedy in a manner that feels rather lazy.

When the satire shows its teeth a bit more in drama involving a llama – which underscores racism and attitudes towards migrants – and in the anthem and flag of Nova Europa, Brosens and Woodworth skewer their targets more successfully, highlighting the ease with which history might repeat itself, but they struggle to maintain the momentum and laughs.

International sales: Be for Films, info@beforfilms.com