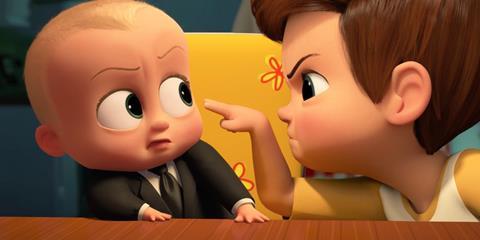 Hyperactive, oddly premised and never quite as endearing as it should be, The Boss Baby is an animated family comedy that seems to have all the right elements but just doesn’t deliver. Even Alec Baldwin’s turn voicing the faintly Donald Trump-ish title character can’t inject the necessary sense of fun into this overeager effort from DreamWorks Animation.

The recent-past setting, the familiar pop songs and the slightly retro, Tex Avery-inspired animation style should give parents a bit of a nostalgia buzz

The subject matter – and maybe Baldwin’s recent run impersonating Trump on Saturday Night Live – should drive some decent performances when the film starts its international rollout later this month (after a US debut at the Miami Film Festival). But with significant animated competition around its March 31 US launch, this Fox release won’t be a sure thing at the box office.

Inspired by a best-selling picture book and written by Michael McCullers (who also scripted DreamWorks’ Mr Peabody and Sherman), the story is told – with Tobey Maguire as grown-up narrator – through the eyes of Tim (voiced by Miles Bakshi), a wildly imaginative seven year-old.

The arrival in the household of Boss Baby - with his vaguely-explained suit, briefcase, brash attitude and sharp tongue - robs Tim of the attention of his parents (Jimmy Kimmel and Lisa Kudrow) and starts a sibling war between the two brothers.

The weird premise, it turns out after a confusing half-hour or so, is that the new arrival has been sent by infant delivery organisation Baby Corp to reverse a shift in adults’ affection from babies to puppies, a shift that could become permanent if the villainous head (Steve Buscemi) of the pet company for which Tim’s parents work has his way.

Foiling the puppy plot forces Tim and Boss Baby into an alliance that undermines their sibling rivalry and gives the film its emotional hook.

Director Tom McGrath previously made all three of DreamWorks’ Madagascar movies (with Eric Darnell as co-director), but The Boss Baby doesn’t have as many laughs, or even as much heart, as those hit franchise outings. What it has instead is a lot of slapstick action, some colourful fantasy sequences and a few decent adult jokes (none specifically about the new US President, of course, since the script would have been written long before last year’s election campaign).

The recent-past setting, the familiar pop songs and the slightly retro, Tex Avery-inspired animation style should give parents a bit of a nostalgia buzz. In other respects, though, the design is typical of the film’s not-quite-there feel. To up the cute factor, Boss Baby, Tim and most of the other characters have huge, anime-style eyes, but the eyes are set in otherwise pretty bland, inexpressive faces.

Screenplay: Michael McCullers, based on the book by Marla Frazee