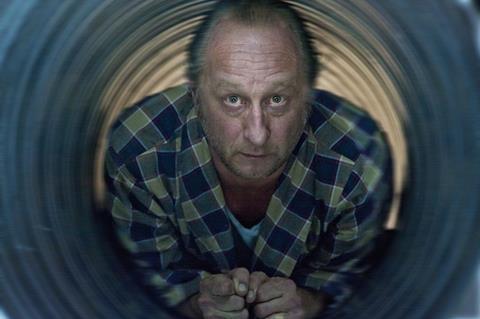 Jaco Van Dormael has never lacked for inspired invention, but sustaining audience interest in the worlds he creates has not always proved so easy. Now with the consistently playful, often delightful and frequently funny God fantasy The Brand New Testament, the Belgian auteur delivers his most substantially enjoyable film since 1991’s Toto The Hero. His first full screenwriting collaboration on a feature – with Thomas Gunzig – signals a creative resuscitation for Van Dormael, who rather tried audiences’ patience with his last film, 2009’s ambitious, overloaded Mr Nobody.

Catherine Deneuve, it is now abundantly clear, really is game for anything.

Congregations will likely respond strongly to The Brand New Testament’s inspired “what if?” scenario: God (Benoît Poelvoorde), it turns out, lives among us, or at least in a Brussels three-bedroom apartment, with his unnamed goddess wife (Yolande Moreau) and ten-year-old daughter Ea (a well-chosen Pili Groyne). In this universe, God isn’t so much benign or vengeful, but more a heartless bastard, who enjoys nothing more than heaping vexations large and small on the species he created in his own image.

Perpetually attired in a grey T-shirt and ratty dressing gown, he’s an obnoxious bully to his wife and daughter – that’s when he’s not busy locked in his office, smoking, boozing and inflicting misery on mankind via his vintage desktop computer.

After God takes a belt to his daughter, who has never been allowed outside the family home, Ea solicits advice from a her long-lost brother “JC” (a kitsch statuette of Jesus Christ that comes briefly to life) and enacts an ingenious revenge on her father. Hacking into his hard drive, she sends a text message to the mobile phone of every human advising them of their exact date of death, crashes the computer to rob God of any power to cause more mischief, and then breaks out of the apartment prison via a secret portal at the back of the family’s washing machine.

After such a strong set-up, sustaining the story momentum and comic energy was always going to be a tough ask, and the pacing does inevitably sag as Ea hooks up with a homeless bum (Marco Lorenzini), and then recruits six more apostles to contribute fresh chapters for the titular Bible update. Some of these characters – which include a sex addict, a killer and a sickly boy – register more vividly than others, but best of all is the haute-bourgeois lady (Catherine Deneuve) who, ignored by her businessman husband and with only five years left on her clock, enjoys an assignation with a pretty young rentboy and then finds a more enduring romantic pairing with the gorilla she purchases from a local circus. Deneuve, it is now abundantly clear, really is game for anything.

Laughs reliably return every time the film cuts to the travails of God, who follows Ea through the portal (which his browbeaten wife immediately seals behind him), and is mistaken for a paperless illegal immigrant. His selfish nature repels anyone who tries to help, and the indignities pile up. A ratty-faced Poelvoorde is excellent in the role, brilliantly capturing the exasperation of a man who is entirely to blame for his own misfortune. The story wraps up satisfyingly with a female-positive takeaway that gives the naturally sympathetic Moreau some nice scenes of her own. As might be expected with Van Dormael, technical credits are very proficient, with Sylvie Olive’s production design a particular standout.