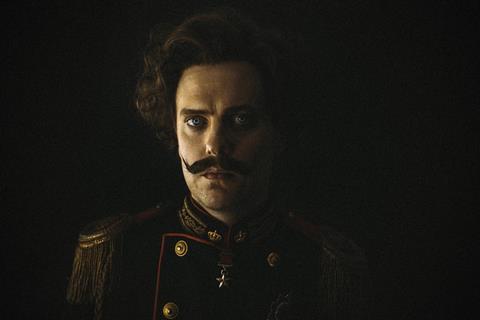 The Count opens with the caption, “This is the story of my father’s cousin,” before a television at the end of a dark corridor sparks into life with talking heads describing a ‘psychopath’, ‘evil incarnate’ and crimes that include fraud, murder and mutilation. It might be reasonable, then, to expect a dark, bumpy ride ahead, but writer/director Jon Blahed doesn’t deliver on the potential of his material. He pulls himself in so many directions that his prize asset – the criminal mastermind – gets lost in the mix; the result isn’t likely to ride the wave of popularity of true crime stories generally, and Nordic noir in particular.

Crucially, The Count himself remains frustratingly out of reach

Maximilian Kartsahev’s life and career (until his death in 2007) is certainly stranger than fiction: his father’s suicide when he was three; early encounters with drugs and child psychologists; the adoption of the affected Russian name and false claims of being a count; his first murder at 19 (shooting a teenager in a burger joint), followed by two more – of a pregnant fiancée and later a girlfriend – miraculously getting away with all three. And, in between, involvement in a massive shell company fraud that garnered him millions.

Blahed relates this colourful life in multiple ways, including the customary archive newsreel and talking heads, but chiefly through his own telling of the story to seemingly random members of the public who sit opposite him in a film studio. Alongside the narration, different experts (a psychologist, criminologist, media studies professor) give their view on Kartsahev’s criminal personality and the media’s treatment of true crime stories, while a ballistics expert and The Count’s former defence lawyer mull over the details of his one murder trial.

Despite his personal connection to his subject, the director’s intentions never quite mesh. On the one hand, he sets out to unpick a childhood curiosity and investigate the life of a relative he never met, spoken of only in whispers by his family. On the other, he attempts to deconstruct his own exercise, by analysing society’s fascination with monsters and the ethics of true crime TV shows and films in turning real-life tragedy into entertainment.

Crucially, The Count himself remains frustratingly out of reach. There is scant detail of his massive fraud, insufficient sense of the criminal skills that facilitated it or of the qualities that attracted a string of women, despite the well-documented dangers. We see his face just twice, once obscured. Blahed reveals onscreen one obvious obstacle to this: the refusal of Kartsahev’s immediate family (a sister and children) to take part. The filmmaker is also reluctant to explore a psychologist’s game assertion that the director’s motivation for making the film is a fear of identification with his bloody relative. And so, despite all the talk, there’s virtually nothing in the way of genuine insight or revelation.