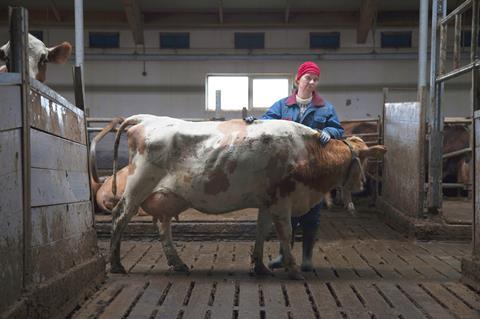 The combination of unforgiving landscapes and an unyielding eco-warrior heroine made Benedikt Erlingsson’s Woman At War an irresistible international hit. The County seems well placed to match that success as Rams writer/director Grímur Hákonarson follows a widowed Icelandic farmer determined to challenge the monopolistic stronghold of a corrupt cooperative.

Arndis Hronn Egilsdottir is centre stage throughout, giving a commanding performance as a careworn dairy farmer struggling to survive

A slightly more conventional affair than Woman At War, The County is still a poised, compact audience pleaser that chimes with contemporary concerns over agricultural practices and female empowerment, whilst also giving viewers the chance to indulge in some Capra-esque cheering of the underdog.

Arndis Hronn Egilsdottir is centre stage throughout, giving a commanding performance as Inga, a careworn dairy farmer struggling to survive in a small Icelandic community. Cinematographer Mart Taniel finds an aching, wintry beauty in the snow-dusted fields and bleak, unspoilt wastes of Iceland, but the film doesn’t romanticise the backbreaking work and long working hours of farm life. Technology may have made robotic milking possible, but it is still Inga’s brute human strength that is required for the birthing of a calf.

Weariness and financial worries have made Inga doubt the viability of a future on the farm with her husband Reynir (Hinrik Olafsson). It is three years since their last holiday and they are sinking deeper into debt. Reynir’s death is devastating but subsequent revelations leave her determined to wage a crusade against a powerful local co-operative that stifles competition and silences opposition. Inga’s Facebook post entitled The Co-Op Mafia is a first blow in a war that sees her vilified, ostracised and transformed from a mild-mannered farmer into an enemy of the people. Her ways of striking back become increasingly public and provide the film’s comic highlights.

Hákonarson is very effective at stressing Inga’s sense of isolation. She lies at home, enveloped in a duvet like an Egyptian mummy, restricting herself to half of a bed that once held a couple. At night she stands in the doorway, her hair ruffled by a breeze as she stares into a darkness that feels infinite and a silence that is profound.  Egilsdottir makes Inga a very sympathetic figure, playing her with the bone weary resolve of someone who recognises that she has nothing left to lose.

As Inga transforms her grief and anger into action, the film starts to plough a more familiar furrow. At loggerheads with conniving Cooperative boss Ejyolfur (Sigurður Sigurjónsson) and members of her own community, we hope for her triumph whilst fearing the price that she might pay.

The County is a rare film that might have benefitted from being slightly longer and more fully developed in its closing stages. Hákonarson keeps it focused and involving, working against the grain of complete Capra-style triumphalism to achieve a more realistic but equally satisfying conclusion.