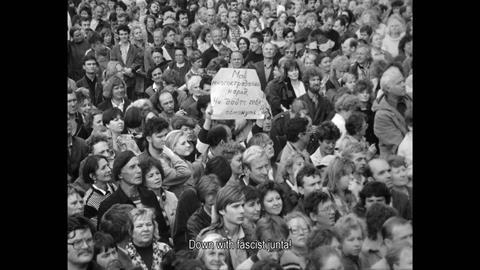 Sergei Loznitsa’s The Event makes a striking follow-up, if not strictly a companion piece, to his Maidan, which documented the recent political protests in Ukraine. In his new film, the Belarus-born director documents similarly turbulent and decisive events in Russia, nearly 25 years ago, but this time exclusively through archive footage - a technique he previously used in his 2006 film Blockade, about the Siege of Leningrad.

The crowds can’t know that they’re about to enter an era that will be traumatic for them in different ways.

The Event chronicles the gatherings of the Russian public on the streets of St Petersburg, then Leningrad, in August 1991, in response at an attempted coup d’état by hardcore Communists, involving the detention of the then President Mikhail Gorbachev. It’s fair to say that the film raises more questions than it answers, and that audiences are likely to emerge in the dark about a crucially important modern event that has nonetheless somewhat subsided in the popular memory (although perhaps not in the former USSR).

But the key point which emerges from The Event is that at the time, the Russian people were thoroughly in the dark about what was occurring, and that the truth about the putsch is still somewhat clouded in enigma. Loznitsa makes the affair, as seen from the Leningrad streets, exceptionally vivid, and following the international success of Maidan, The Event will be greatly welcomed at festivals, if a tougher sales prospect than its predecessor.

Screened in near-square Academy ratio, The Event is comprised of black and white footage filmed over six days in August ‘91 by a group of camera operators from the St Petersburg Documentary Film Studio. As in Maidan, it’s fair to say that the crowd is the star, with the camera in the thick of things, weaving through the action on the streets, occasionally picking out specific individuals, but generally giving the impression of a restless populace impatient for the information they’ve been denied - and heartily sick of the rigours of Communist rule, which thanks to Gorbachev’s policy of perestroika, were nearing their end.

Some scenes show angry protests at their peak - one group turning a portakabin on its side to create a roadblock, banners protesting against authoritarian action and against the ‘State of Emergency Committee’ imposed by the coup.

Perhaps Loznitsa’s most telling creative device is an enhanced sound design - by his long-time collaborator Vladimir Golovnitsky - that picks out threads of conversation in the crowd, and shows how talk, both among people, and on the radio, provided a sort of bush telegraph by which the population kept itself informed. Voices both official and unofficial - loudspeaker announcements, radio broadcasts, a protest folk singer - thread their way through the film, giving The Event almost the feel of a documentary opera, something it has in common with Maidan.

The film has an astonishing urgency, and it’s often only the hairdos and the somewhat rough-and-ready clothes - the last flush of Soviet-era austerity - that remind us we’re looking a full quarter century into the past. That realisation makes the film unbearably poignant. We see the Russian people at once anxious and exuberant on the brink of long hoped-for change - and indeed, the film’s chronicle concludes with the USSR hammer and sickle being replaced with the flag of the Russian Federation. But the crowds can’t know that they’re about to enter an era that will be traumatic for them in different ways.

Indeed, one of the most telling scenes involves the mysterious arrival of a car bearing four men who rush into a meeting behind closed doors, then emerge and drive off again. One of them, with a full head of hair and a natty sports jacket, is a KGB man who resigned that week as new opportunities beckoned - Vladimir Putin.