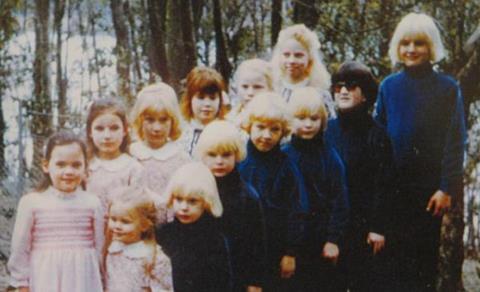 In the late 1980s and early 1990s, The Family’s shocking antics — including stealing, abusing, and administering mind-altering drugs to children in an attempt to prepare a new population for the oncoming apocalypse — became headline news in Australia. Now, they’re the subject of a probing documentary by The Triangle Wars filmmaker Rosie Jones. Taking its title from the sect at its centre, the film paints a damning, absorbing portrait of one of the most insidious groups in Australian history.

The Family becomes an engrossing study not just of a specific situation, but of the psychology behind it

For those unaware of The Family’s affairs, the list of horrifying elements only continues: capitalising upon the counter-cultural stirrings of the 1960s and 1970s to create a religious-leaning movement, the self-styling of yoga teacher turned charismatic leader Anne Hamilton-Byrne as a Jesus-like figure, perpetrating adoption scams to boost their numbers, and victimising anyone who dared to defy their orders. Audiences familiar with other cult exposés — specifically the wave of Scientology-focused efforts garnering popular attention of late — will find similarities in much of the talk and tactics on display, and in the events that followed, too. While that applies equally to the group and to the film, there’s nothing routine or repetitive about either.

Indeed, the combination of the true tale’s recognisable components and its riveting retelling should help the movie find the broader viewership it deserves after its world premiere at the Melbourne International Film Festival, even beyond the documentary festival circuit. An Australian release is slated for 2017, and with CBS News Inc. and BBC Storyville among the title’s backers, international television screenings seem certain bound to follow. Given the popularity of crime-focused factual content on online platforms, streaming services could also extend The Family’s reach.

Despite the infuriating details at the heart of the story, Jones’ chronicle is calm, considered, and thorough as she weaves together expert interviews, survivor accounts, archival footage, and well-staged recreations. Former detective senior sergeant Lex de Man, also a consultant to the film, acts as its primary guide through evidence that was unearthed after a raid in 1987 thrust the cohort into the spotlight.

Early in the documentary, de Man shares the words of warning he received when he started looking into the case: “Don’t get involved. If you get involved, it will be with you for a lifetime.” As his experiences intertwine with the recollections of other interested parties — such as journalists covering the tale, some of whom found their efforts stalled due to The Family’s powerful connections — the truth of that caution remains heartbreakingly apparent.

Of course, The Family doesn’t merely peer in from the outside, and also features gripping conversations with previous child and adult members. Decades later and now adults, they talk about the treatment they received, delving beyond the identical outfits, bleached hair, and fake smiles seen in propaganda-like videos and into frequent instances of starvation, bullying, beatings, druggings, and manipulation. Presenting another side, former adult members dissect the allure of the blonde, bewitching Hamilton-Byrne, including the way she used the promises of love, loyalty, and unconditional acceptance as a controlling mechanism. While most are critical, one past follower counters that life at group’s Lake Eildon base outside of Melbourne wasn’t without its happy moments.

Accordingly, like many factual and fictional efforts that attempt to understand the appeal of a commanding guru, The Family becomes an engrossing study not just of a specific situation, but of the psychology behind it. Revelations from Hamilton-Byrne’s past are as illuminating as tales from the cult’s heyday are distressing; however it’s why these events occurred that proves the most unsettling aspect of the entire documentary, rather than how.

Fans of the Errol Morris school of filmmaking, which clearly include Jones herself, will notice her penchant for his stylistic tricks — the framing of interviews and staging of the recreations chief among them — with The Family’s content perfectly suited for such an approach. Excellent technical work from cinematographer Jaems Grant and editor Jane Usher gives the feature the necessary polish, although the information contained within would have proved compelling regardless.