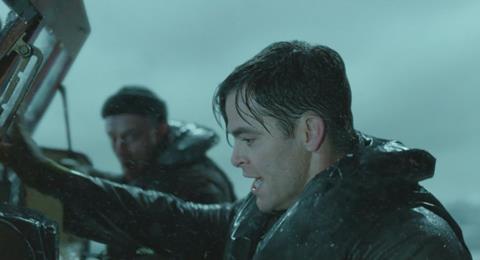 3D sea rescue tale The Finest Hours is set in 1952 – and it sometimes feels as if it was made then too. Though visually boosted with CG effects, this based-on-a-true-story Disney action-thriller is for the most part an old fashioned account of watery derring-do, complete with a boyish hero, a rosy-cheeked sweetheart (played by Chris Pine and Holliday Grainer, backed by Casey Affleck) and some pretty corny dialogue and performances.

Families will be the most likely audience when the PG-13-rated film opens wide in North America on Jan 29 (seven weeks after oceanbound flop In the Heart of the Sea), but many may prefer to wait for the home entertainment release. A lack of star power will probably limit the take from international markets, where openings are set through January and February.

The real events – recounted in a popular 2009 book – unfolded when a winter storm hit the coast off a small Massachusetts town and ripped two tankers in half, stranding the crews at sea amid hurricane-force winds and 60-foot waves. With the main Coast Guard team making for one ship, a novice four-man crew on a 36-foot lifeboat was dispatched to the other and miraculously got 32 of the 33 sailors back to land.

Scriptwriters Scott Silver, Paul Tamasay and Eric Johnson (who previously worked together on The Fighter) divide the story into three threads: one following the progress of lifeboat coxswain Bernie (played by Chris Pine, from Star Trek Into Darkness) and his crew; another tracking the efforts of the sailors and their moody chief engineer (Casey Affleck) to stay afloat; the third showing Bernie’s fiancee Miriam (the UK’s Holliday Grainger, from The Borgias) and the townsfolk on shore.

With Craig Gillespie (Million Dollar Arm) directing, the first act covers Bernie and Miriam’s romance and lays out a vague backstory about an earlier unsuccessful rescue that put the shy, uncertain Bernie at odds with some of the locals. While Pine and Grainger are likeable enough as the young lovers, the melodramatic tone doesn’t do the actors any favours.

The action picks up when the focus moves off shore as Bernie’s lifeboat battles through the waves to reach the tanker. The production apparently did some shooting at sea, but much of the on-board footage looks as though was shot in the studio and doesn’t meld particularly well with the CG effects. The effects themselves are used mostly to create the towering waves, and they’re effective enough at that, though the 3D (a post-production conversion job) lacks depth and never makes these seas as awe-inspiring as those in 2000 rescue drama The Perfect Storm (also based on a true story and also set in Massachusetts).

The climactic rescue sequence has tension and some thrills, but it’s over fairly quickly and the film settles back into a sentimental lull.