Alexander Skarsgård is a scary standout in this gritty war drama 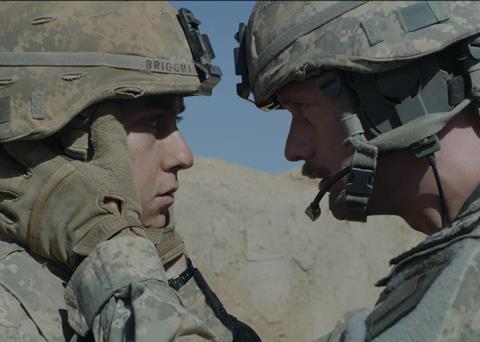 The story of Afghanistan’s “Maywand District Murders” made headlines in 2010. They became a must-read article in Rolling Stone, and then an award-winning 2013 documentary, The Kill Team, by Dan Krauss. Krauss has since turned his doc into a dramatised feature, changing the names but keeping the title. Even fictionalised, it’s no less important – or bleakly depressing.

At its core, The Kill Team has one great performance, and some important things to say

An investigation of peer pressure, machismo and a soldier’s dangerous ability to dehumanise the enemy, Krauss’ movie, premiering at Tribeca, centres on a small squad of US Army infantry in Afghanistan. As a decidedly downbeat portrait of America at war, its box-office chances are definitely better outside the United States than within, although the film’s lack of bated-breath action may still limit its popular appeal.

Set in a dusty outpost, the story begins with a literal bang as the young soldiers lose a popular, make-friends-with-the-locals sergeant. Replacing him is Sgt. Deeks (Alexander Skarsgård), a steely, gung-ho warrior who is more interested in notching kills than winning hearts and minds. In his mind, every Afghani is an enemy – and so is any US soldier who’d rather cite a civilian’s rights than do his righteous duty. So just do what you’re told to do – and kill who you’re told to kill.

The small bit of sand in this otherwise finely tuned killing machine is Nat Wolff’s Andrew Briggman. He’s clearly eager for attention, too, and Deeks’ valuable approval seems maddeningly hard to win. Yet the sergeant’s methods – making recruits fight each other for promotions and gang up on suspected snitches – makes Briggman nervous. He knows it’s eventually going to be his turn to prove his courage by murdering an innocent Afghani. And the scariest thing is, he doesn’t know whether he has enough courage not to.

Briggman is a bit of a thankless part – movies generally aren’t built around heroes who don’t know what they want – but Wolff does what he can with it. And this is Skarsgård’s picture, and he dominates every scene he’s in because, like the cocky character he’s playing, he knows he doesn’t have to do anything except show up. He’s a bright, cold star. Less riveting are the scenes surrounding him.

Other films about conflicted soldiers – from 1987’s Full Metal Jacket to 2008’s The Hurt Locker – have also managed to dramatise the dangerous, adrenalised appeal of war. They understand the heart-pounding fear, the dry-mouth tension – but also the camaraderie, the catharsis, and the rush that keeps pulling people back. Krauss, who also wrote the screenplay, doesn’t manage to get that on the screen. The action scenes – mostly house-to-house searches – are flatly shot, each one fading dully into the next without a single real moment of suspense. The soldiers themselves are nearly indistinguishable and although it’s clear they don’t have much use for Briggman, Krauss can’t convince us that we should care either.

At its core, The Kill Team has one great performance, and some important things to say – about the dangerous appeal of the strong, and the easy malleability of the young. It’s well worth watching, and thinking on. It’s just a shame that that great performance isn’t matched by all the others – and that what the film has to say is said in such a dutifully by-the-book way.