An octogenarian heads off on adventure in this Argentinian road movie 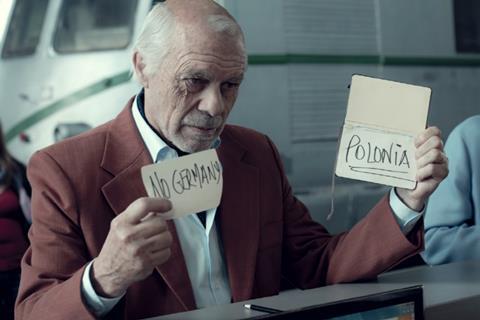 At the age of 88, Abraham Bursztein (Miguel Ángel Solá) is about to be put out to pasture by his children. They have sold his house in a Buenos Aires suburb, and booked him into a retirement home. They are even suggesting that it is time he has his crippled limb amputated. But cantankerous Holocaust survivor Abraham has other plans. Fuelled by a sense of duty and sheer bloody-minded stubbornness, he sets off for a journey which will take him halfway around the world, and from which he doesn’t expect to return.

A klezmer-infused score brings an atmospheric, if slightly kitsch, charm to the picture

This is a minor addition to the Holocaust survivor genre, which adds little, and will struggle to break out of the festival circuit. With its formidable pensioner protagonist, however it may connect with older audiences. Inevitably, the story lends itself to programming within Jewish-themed events.

Director Pablo Solarz’s main stylistic device is the combination of black and white and colour footage. Abraham’s memories and his dreams are rendered in nostalgic sepia-tinted colour; the present day is shown in stark black and white. But although initially the past is depicted as a highly choreographed celebration, as the film progresses the romanticised approach fades and the brutal realities of survival in Lodz, Poland after German occupation become clear.

Abraham’s first port of call is Madrid, where his estranged daughter lives, although he has no intention of seeing her until circumstances dictate that he must. Their encounter is powerful, but a little too brief to be fully satisfying. Likewise, the fleeting friendship with glamorous senior Gonzalez (Ángela Molina), the much-married proprietor of his hotel, could have stood a few extra scenes.

In contrast, a chance meeting with an empathetic anthropologist (Julia Beerhold, positively saintly as the film’s good German), feels a little schematic. The road – or rather rail – movie structure is, by nature, episodic, but in this case, we are to frequently wrenched away from the characters we would prefer to stay with in order to make a plot point.

The Last Suit is about as light on its feet as its doddery protagonist, with plot points often as laboured as his breathing. But this journey in search of closure which ends up opening the mind of a stubborn old man has some moments of real pathos. A klezmer-infused score brings an atmospheric, if slightly kitsch, charm to the picture; this gives way to a more melancholy orchestral accompaniment, as the hard edges of this tough old man are gradually softened.