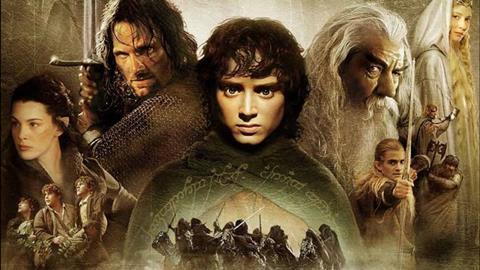 Visually striking, thematically grave, and morally weighty, Peter Jackson’s The Lord Of The Rings: The Fellowship Of The Ring, is a miracle of a movie: a three-hour fantasy-action-adventure that not only faithfully captures the spirit of its respectable source material, the first inJ.R.R. Tolkien’s trilogy of books, but also stands tall on its own merits as one of most ambitious movies to have come out of Hollywood in a long time. Eagerly awaited by millions of fans around the globe, New Line’s large-budget (more than $90m) fantasy is a must-see event movie, whose literary and cinematic qualities guarantee a strong theatrical appeal in every territory, easily crossing age and national boundaries, before becoming a cult classic, subject to repeat viewing by the book’s most ardent devotees.

The most massive undertaking in New Line’s history, Lord Of The Rings easily claims its status as the mini-major’s most impressive film to date, superseding the studio’s previous jewels, Paul Thomas Anderson’s Boogie Nights and Magnolia. Set in a time of uncertainty in the land of Middle-earth, the saga is structured as an heroic battle of good vs. evil, in which the very future of civilization rests on the fate of One Ring that has been lost for centuries. A large superlative cast of both British and American actors, headed by Elijah Wood as the young hero, and a brilliant Ian McKellen as his wise guide, and including stunning turns by Viggo Mortensen and Sean Bean, lends the film the kind of prestige and weight seldom encountered in mainstream epic adventures.

For the record: Jackson’s version is not the first big-screen adaptation of the Tolkien masterpiece (published in three volumes in 1954-1955). In 1978, Ralph Bakshi made a poor animated picture that featured the voices of Christopher Guard and John Hurt (among others) and covered about half of the trilogy with a running time of 133 minutes. In marked contrast, Jackson’s Ring cycle generates the kind of epic cinema excitement, encountered in the films of Abel Gance (Napoleon), Akira Kurosawa (The Seven Samurai, Ran), David Lean (Lawrence Of Arabia), Stanley Kubrick (2001: A Space Odyssey), and arguably last seen on the American screen in Coppola’s Apocalypse Now; it certainly far surpasses the standards of popular epics like Braveheart or Gladiator, the Oscar-winners of 1995 and 2000, respectively. What the trilogy’s first installment shares with all those seminal movies is not just expansive breadth, but complex and engaging characters, genuine movie magic via state-of-the-art effects, and, most important of all, a moral and emotional significance, which are terribly missing from other event movies such as Titanic, Star Wars, and Pearl Harbor.

In its scope and grand operatic scheme, Lord Of The Rings represents the perfect match between the singular vision of an artist, Jackson, and a mythical-literary text that has influenced generations of readers worldwide in a deeper, more meaningful way than other books, such as Harry Potter. Tolkien’s hero, Frodo, may not have the same catchy ring as J.K. Rowling’s protagonist, but artistically speaking, since both films were made under the auspices of AOL-Time-Warner, Jackson’s picture is head and shoulders above Columbus’ children fantasy.

It’s almost tempting to say that it was worth waiting for Jackson, whose last notable achievement (if one overlooks his 1996 studio film The Frighteners) was the haunting horror drama Heavenly Creatures in 1994, to take his time and make what’s undoubtedly the best film of his career, one for which he possesses the requisite technical skills—and passion. Rumour has it that Jackson has been “preparing” himself for decades to adapt Tolkien’s seminal book to the screen.

Though necessary, the prologue, in which the history of the Ring is recounted in voice-over, is rather weak and overly long. However, as soon as the narrative proper begins, the yarn grabs the viewers with the captivating force of a mythic tale, seldom losing its grip even in its feeble moments. The overture quickly establishes that the Ring has been lost for centuries and that powerful forces are now unrelenting in their search for it. Fate, which a major force in the saga, has placed the Ring in the hands of a young Hobbit, Frodo Baggins (Wood), forcing him to risk his life in order to keep it.

The film’s motto, repeated throughout in live-action dialogue or voice-over states: “One ring to rule them all, one ring to find them, one ring to bring them all and in the darkness bind them.” Indeed, a daunting task lies ahead of Frodo when he becomes the Ringbearer, and since he can’t do it alone, a Fellowship bands together tolend him the wisdom and power to accomplish his mission.

Frodo’s Ring is no mere trinket—it is the One Ring, an instrument of absolute power that could allow Sauron, the dark Lord of Mordor, to rule Middle-earth and enslave its people. Along with his loyal Hobbit friends, Humans, a Wizard, a Dwarf, and an Elf, Frodo must take the One Ring to Mount Doom, where it was forged, and destroy it forever.

The central narrative thread, and the one to appeal the most to teenagers, revolves around the camaraderie that evolves between Frodo and his friends: Sam (Astin), Merry(Monaghan), and Pippin (Boyd). About half of the film is structured as an adventure, in which the quartet has to endure painful rites of passage and prove their strength and loyalty to each other while facing foes of every imaginable kind. However, rather shrewdly, the narrative is three-generational, and more mature viewers will be intrigued by the characters of Bilbo Baggins (Holm), the old, adventurous Hobbit who bequeaths the Ring to his young cousin Frodo; Gandalf (McKellen), a powerful wizard who assists Frodo; Aragon a.k.a.Strider (Mortensen), a brave warrior who joins and defends the Fellowship; Boromir (Bean), a conflicted human who joins the Fellowship despite deep misgivings about destroying the Ring; and Saruman (Lee), a wizard who has succumbed to Sauron’s evil.

It’s a known fact that Tolkien’s mythology doesn’t do much for women due to the paucity of female characters, basically two, whose roles are contained in the film’s least involving sequences. Frodo and his buddies are aided in their quest by Arwen (Tyler), the Elf princess who falls in love with the human Aragon; and Galadriel (Blanchett), the Elf Queen of power and wisdom. Not surprisingly, the two actresses (particularly Blanchett) render the only unconvincing parts in what’s a uniformly excellent cast.

Those who know Jackson’s previous work should not be surprised by his current accomplishment. For years,the New Zealand director was known to the festival and arthouse circuits for his offbeat sci-fi and horror movies (Bad Taste; Braindead), flicks that achieved international cult status. And if, by temperament, Jackson is more naturally inclined to—and more effective at—portraying evil than good, then so be it. Indeed, the most accomplished and scariest sequences are the dark ones (in the second half of the film). Frodo’s journey means venturing deep into territory manned by Sauron, where he’s amassing his frightening army of Orcs. But it is not only external evils that the Fellowship must combat—there are also internal dissensions and the corrupting influence of the ring.