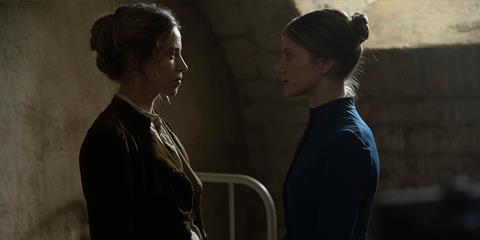 A lavish Gallic gothic thriller largely set in Paris’ infamous Salpetriere hospital, the latest picture from Melanie Laurent is a strikingly beautiful production which delves deep into the ugliness at the roots of psychiatric medicine. Eugenie Cléry (a captivating Lou de Laâge) is bright, outspoken and unconventional – all deeply inconvenient traits in a young woman of a wealthy Bourgeois background in late 19th century Paris. But what sets Eugenie apart is not just her propensity to sneak off to Montmatre cafes to read poetry and smoke, it’s the fact that she has the ability to communicate with the spirit world. Dismissed as an embarrassment and a liability, Eugenie is packed off by her autocratic father to the women’s asylum to rot.

The film, which is based on the bestselling and prize-winning debut novel Le Bal Des Folles by Victoria Mas, is the first French Amazon Original production. Following on from its world premiere in a Gala slot in Toronto, it will be launched on the streaming platform on September 17th . A stirring story of female solidarity against the oppressive, tightly laced restrictions of the age, The Mad Women’s Ball combines first rate production values with taut storytelling and a touch of Grand Guignol extravagance when it comes to the macabre treatments meted out to the women by the men who dictate their fates. It’s a compelling piece of filmmaking from Laurent – her fifth feature film as director. She also stars in the picture as Genevieve, the head nurse at Salpetriere.

This is a film which lays its cards – and its ambition – on the table from the outset. The opening shot is a thronging Parisian crowd scene, a highly-strung melee which, it is revealed, is the city’s response to the funeral of Victor Hugo. In the midst of the grieving hordes, revealed by a series of unapologetically melodramatic jump cuts that close in on her neat coiffure and heaving shoulders, is Eugenie. We don’t see her face until the next scene when, late for supper again, she makes a bland excuse to her father and trades a secret smile with her brother Theophile (Benjamin Voisin).

The asylum is equally dense in detail – the lighting at times evokes the paintings of Caravaggio – but the personality of the space changes as Eugenie’s understanding of the inmates shifts from perceived threats to fellow sufferers under the regime of showman scientist Professor Jean-Martin Charcot (Grégoire Bonnet). Charcot makes spurious diagnoses and recommends unconscionable cruel treatments; he is blithely dismissive of the ramifications of the public hypnosis he performs on vulnerable teenager Louise (Lomane De Dietrich). His misogyny is deeply rooted and extends to the nursing staff as well as the patients. Genevieve, herself tortured by grief, finds a connection with Eugenie and pleads her case. She is told, abruptly, to empty the chamberpot

The highlight of the women’s lives is the annual ball, in which Parisian high society mingles with the inmates, garbed in fancy dress and daubed in clownish makeup. The courtly score – cello and piano figure prominently – and the camerawork both take on the frenzy of excitement of an event in which the boundaries between sanity and madness are blurred, and the women of Salpetriere catch a glimpse of freedom.