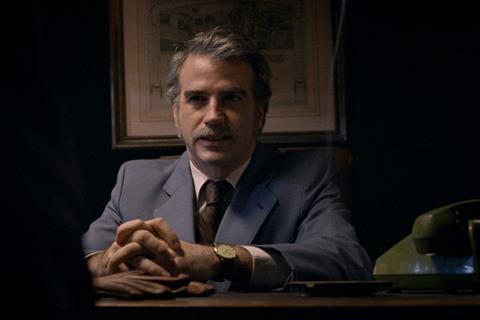 Federico Veiroj’s love of anti-heroes continues with this fifth feature, an enjoyably offbeat period character study wrapped in a thriller and laced with bone-dry humour that charts the rise of a conscience-free money launderer during the 1970s Uruguayan military dictatorship. One of Veiroj’s pointed ironies is how ineffectual Humberto Brause (Daniel Hendler) – who describes his money-brokering as “the root of all evil” – is in his personal life while still managing to dig his way deeper into crime through a mix of luck and greed.

Adapted from Juan E Gruber’s novella Así Habló el Cambista (This is How the Moneychanger Speaks) by Veiroj, the Uruguayan filmmaker’s long-time cinematographer Arauco Hernández (who also co-wrote Veiroj’s A Useful Life) and Martín Mauregui (co-writer of Pablo Trapero’s Lion’s Den, Carancho and White Elephant), the film has already been embraced by the festival circuit – showing in New York, San Sebastian and Vienna after Toronto – and is being released this month in Latin America. More meaty and less meandering than last year’s Belmonte, Veiroj’s distinctive deadpan approach, which marks his film out from darker Latin American period fare such as Benjamín Naishtat’s Rojo or Pablo Larrain’s Pinochet trilogy, is also likely to prove attractive to art house cinemas elsewhere.

The book’s title is carried into the film, which is voice-over heavy in places, with Brause’s first-person recollection. While on the stodgy side, it allows Veiroj an economical set-up and demonstrates Brause’s inability to self-scrutinise. The action starts in 1975, when Uruguay has become a favourite of criminals looking to profit from the plummeting economies in neighbouring Argentina and Brazil, before looping back to 1956 and then working its way forward again.

Hendler plays Brause with a haunted ambiguity. At his side is Argentinian star Dolores Fonzi as Gudrun, the daughter of Brause’s boss (Luis Machín) and, in one of Veiroj’s typically quirky asides, an impressive recorder player. She soon becomes his wife. Suspension of disbelief is required when it comes to Fonzi and Hendler playing their characters at all the different ages but, as the flashback is part of Brause’s memory, it plays into Veiroj’s air of absurdity.

Brause may get the girl but he is only faithful to money, embracing corrupt politicians at the expense of his father-in-law. His dodgy dealings and equally dicey sexual liaisons may bring Brause cash and pleasure but trouble is never far behind. Though not overtly political, Veiroj shows us the trickle-down effect of corruption, so that even the straight-as-a-die Gudrun is, like everyone her husband touches, somehow tainted.

The central character’s lack of self-awareness means he doesn’t even realise the pool he is wading into has a slippery slope until he’s in way over his head and swimming with sharks. The fact that he is such an innocuous figure, unable to even order a coffee seemingly anywhere in the city thanks to his wife’s interventions, makes the lengths to which he is willing to go to protect his money all the more ridiculous.

Cinematographer Hernández and art director Pablo Maestre Galli create a strong period mood, dominated by deep browns and burnt oranges, frequently lit by puddles of lamplight, and combined with a cooler blue palette. These colours are carried through into Carolina Duré’s costume design to give a sense of a complete world in miniature; and one that is permanently swathed in cigarette smoke. Veiroj’s use of classical music makes Brause’s actions seem all the more farcical and petty, while additional scoring by Hernan Segret heightens the tension when required. For all Brause’s talk of money leading to heaven and the Garden of Eden, we realise he has created his own purgatory without even realising it.