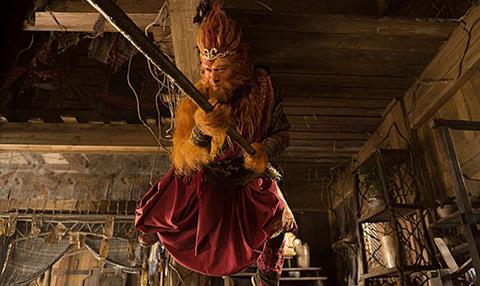 Cheang Pou-soi’s sequel to his own 2014 monster hit ($168m in China alone) is a considerably more coherent and assured production, boasting slick visuals and spirited central performances from Aaron Kwok and Gong Li. Tackling more familiar segments of Wu Cheng’en’s mammoth source text, The Monkey King 2 proves more accessible to overseas and casual viewers, while local audiences should return in great numbers over the Lunar New Year as Asia welcomes in the Year of the Monkey.

Kwok, who played the villainous Bull Demon King in the first film, inherits the lead role of mischievous Sun Wukong from Donnie Yen, and his many months of martial arts training have paid off. The Monkey King remains as agile and athletic as before, and perhaps even more complex in Kwok’s incarnation, as the Hong Kong actor continues to steer his career in intriguing and unpredictable directions.

The Monkey King 2 opens in the US on February 5, one day earlier than Hong Kong, and three days before China, giving Western audiences the unique opportunity of seeing a hotly anticipated Chinese film ahead of its domestic release. While it is unlikely to achieve the same degree of success in the West, adventurous audiences - or those familiar with the cult 1970s Japanese TV series Monkey - should find Cheang’s film accessible and entertaining in equal measure.

Freed after 500 years beneath Five Element Mountain, Wukong is tasked by the Goddess Guanyin (Kelly Chen) with shepherding young monk Xuanzang (William Feng) on his journey west to retrieve ancient spiritual sutras that will pacify the Earth. They are joined by a pair of similarly disciplined creatures: the water-dwelling Wujing (Him Law) and the gluttonous half-man, half-pig Baije (Xiaoshenyang). When the party arrives at a wealthy Silk Road kingdom, they hear stories of a malevolent demon who has been kidnapping and eating children. The pure-spirited Xuanzang is then himself targeted by the seductive yet deadly White Bone Spirit, Baigujing (Gong Li), who feeds on the innocent to retain her own youthful beauty.

Despite its impressive box-office haul, Cheang’s 2014 original arrived on screens after four troubled years of production with effects still unfinished and a largely incoherent narrative. Thankfully, The Monkey King 2 has no such problems. While some VFX sequences are rendered better than others - a CGI tiger is less convincing than Baigujing and her fantastic morphing sirens - the overall quality is superior throughout. Fluid cinematography from Yang Tao and Cheung Man Po and a rousing John Williams-esque score from Christopher Young help elevate the production, while the use of real exteriors and opulent production design by Daniel Fu effortlessly show up the flimsy soundstages and creaky make-up jobs of its predecessor.

The script for The Monkey King 2 is also a huge improvement on last time out. Writers Ran Ping, Ran Jianan, Elvis Man and Yin Yiyi keep the narrative simple and linear, bringing personality to each vignette and action sequence. Characters are given time to breathe and explore their motivations, rather than simply blast each other with magic, as was too-often the case in Szeto Kam Yuen and Edmond Wong’s offering. The action also benefits from the addition of Hong Kong veteran Sammo Hung, who takes over from exiting star Donnie Yen. A specialist in showy close-quarter choreography, Hung designs a number of stylish skirmishes that retain an agency and realism, despite their fantastical setting.

While the performances are understandably broad, the film makes time for the clashes of conviction between William Feng’s benevolent Xuanzang and Aaron Kwok’s more impulsive Wukong. These conflicting motivations, and Xuanzang’s ability to restrain Wukong via his magical headband, inform this central rivalry, and the film wrings a number of genuinely dramatic moments from this relationship.

Unsurprisingly, Gong Li’s effortless radiance all but steals the show. Baigujing strikes fear into her targets merely by arching an eyebrow or flexing a taloned finger. She glides in and out of scenes like a malevolent mist, all the while shimmering with an ethereal beauty. Recalling Brigitte Lin’s Bride With White Hair, Zhou Xun in Painted Skin: The Resurrection and many other femmes fatales, Li makes for a striking and welcome addition to the ranks of memorable screen villains.

There is plenty of humour throughout the film too, whether from Baije’s transformation into a giant hog while inside an even larger porcupine, or simply from the energetic banter between the three disciples as they struggle to get along. But Cheang keeps the comedy, fantasy, adventure and spirituality on an even keel and guides home an almost perfect holiday blockbuster. Big-name stars and dazzling visuals leap off the screen in eye-popping 3D, while the most recognisable chapter of China’s most-beloved literary text plays out in exuberant and energetic fashion. The Year of the Monkey could not have asked for a more enthusiastic welcome.