A magic realist reverie from an Iranian director, shot in Chile, displays an idiosyncratic vision 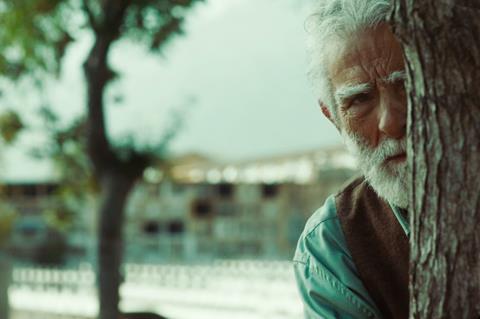 An enigmatic, dream-like disquisition on death and the necessity of remembrance, Oblivion Verses is nothing if not cosmopolitan. Shot in Chile and prefaced by a quotation from German poet Paul Celan, this Spanish-language debut from Iranian writer-director Alireza Khatami has, viewed from one perspective, a universality that should help it connect with admirers of a sensibility that could loosely be termed ‘magic realist’. From a different angle, however, the difficulty of attaching this pensive fable to any geographical or historical specifics makes it feel frustratingly elusive.

Nevertheless, Khatami - best known for the co-directed short Mr Chang’s New Address, featured in 2013 portmanteau Taipei Factory – manifestly has an idiosyncratic vision which will get him noticed, even if this opening statement doesn’t travel far beyond the festival circuit.

The main locale is a cemetery with a crumbling mortuary attached, in an unidentified country. An opening conversation between a philosophically-inclined gravedigger and an ancient caretaker (Spanish veteran Juan Margallo, quietly imposing) inescapably carries echoes of Hamlet, while the fact that the digger is audible but unseen while in the ground suggests a nod to Abbas Kiarostami’s The Wind Will Carry Us.

Working seven days a week and totally – indeed, existentially - identified with his job, the caretaker is seen going about his routine, always showing laconic, patient compassion. His quiet world is suddenly disrupted by an army raid – strikingly shot through distorted glass – before the old man is blindfolded and dragged off into the desert. Yet he survives and walks home – past an ‘Ozymandias’-like apparition of a giant stone hand buried in sand. The cemetery’s corporate-style boss tells the caretaker to keep quiet about what has happened and retire to his home town. But the dedicated doyen feels it’s up to him to organise last rites for a young woman who has been killed for taking part in demonstrations.

The drama is seemingly crammed with allegorical parallels. Khatami has stated that one inspiration was the generation of soldiers who disappeared in the Iran-Iraq war, while the Spanish dialogue directs our thoughts to the eras of Pinochet, Franco et al. Since the visual references to specific periods are oblique, the time frame could as easily be the present day as the 1970s or 80s. This register of generality might strike the sympathetic viewer as universal, but others will balk at the non-specificity.

What is most problematic is that Khatami seems not quite to trust the potential of his story, or of his visual language, and resorts too much to poetic overstatement. This takes the form sometimes of creaky dialogue - “When someone dies, the world dies with them” – and sometimes of incongruous visual flourishes, notably a CGI whale that suddenly swims across the sky. Such touches are all the more disruptive because the film communicates best when patiently working a pensive, minimalist seam.

Still, The Oblivion Verses is nothing if not atmospheric, especially when evoking the eerie calm of a dusty graveyard on a sun-baked day, or exploring the basement archive that is the caretaker’s secret domain; half labyrinth, half mine. DP Antoine Heberlé offers strikingly composed formal shots and a range of contrasting visual textures, playing intense daylight against grey drizzle or impenetrably dense night. A densely fashioned sound design adds to the flavour – though on the musical front, Khatami should perhaps have avoided using an accordion version of Vivaldi that, for many viewers, will be forever inescapably associated with Ruben Ostlund’s Force Majeure.