'The People Vs Fritz Bauer': Review 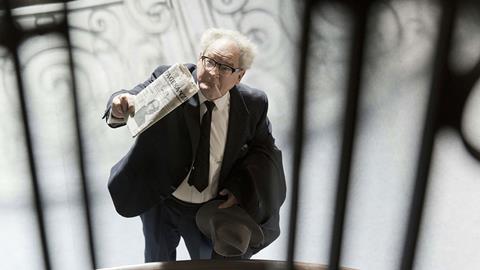 A solid, persuasively-acted account of the real-life mission to bring a Nazi war criminal to justice, Lars Kraume’s serious-minded drama may lack the complexity and emotional draw of Florian Henckel von Donnersmarck’s The Lives Of Others, but this sober, handsomely mounted picture is likely to connect with a similar upscale arthouse audience to that of the Oscar-winning Stasi thriller.

Attorney General Fritz Bauer (Burghart Klaußner), a fiercely intelligent German Jewish lawyer who was himself persecuted and briefly interred by the Nazis, has sacrificed much in his tireless quest to bring the key players of the SS to justice. In fact, according to whispered rumours, he may even have tried to end his own life. Hauled out of an overflowing bath, having accidentally mixed sleeping pills and alcohol, Bauer curtly informs those who start to chip away at his reputation with insinuations that he has a gun, and if he had wanted to kill himself, there would be no doubt in the matter.

The fingerprints of the Nazi regime are evident throughout the West Germany of the late 1950s. Former SS men have quietly slipped out of their uniforms and now hold positions of power everywhere from Mercedes Benz to the government itself. And, in Kraume’s extrapolated version of history, not only do they not facilitate Bauer’s investigations, they actively try and jeopardise them.

Bauer is, initially at least, a starkly drawn, black and white character – both morally and literally. There’s an arresting scene in which he summons his team to his office at the weekend: with his white hair, black spectacles, white shirt and black suit against the monochrome backdrop of his office, it’s a striking image.

But as the story unfolds, and Bauer finds himself ill-served both by Interpol and by the German intelligence agencies which have their own vested interests in protecting former Nazis, he is increasingly forced to enter legal grey areas, and ultimately, to resort to treason. “If we really want to do something for this country, we’ll have to betray it in this case,” he explains to his trusted right-hand man, Attorney Karl Angermann (Ronald Zehrfeld).

Bauer’s treasonous act? To covertly approach the Israeli secret service Mossad and inform them of the suspected whereabouts of Adolf Eichmann, the SS Obersturmbannführer responsible for the mass deportation of the Jews.

But the traces of the old regime extend to the laws by which Bauer and his team have to operate. One in particular – the Nazi’s toughening of existing law clause 175, which made homosexual acts between males illegal, has a direct impact on both Bauer and his married, closeted colleague Angermann. Bauer’s enemies have no compunction in using his sexuality as a weapon against him.

This is not that kind of filmmaking that takes risks or demonstrates much originality, however while it is not showy, there is a level of high quality throughout. The production design is impressive: the interiors are handsome mid-century utilitarian, all blond wood, clean lines, Fase desk lamps and ashtray colour palettes. Equally, costume is well-handled – a detail involving a pair of rather snazzy socks is particularly nice. The score – featuring the kind of moody jazz which is filtered though cigar smoke and liquor – works well also.