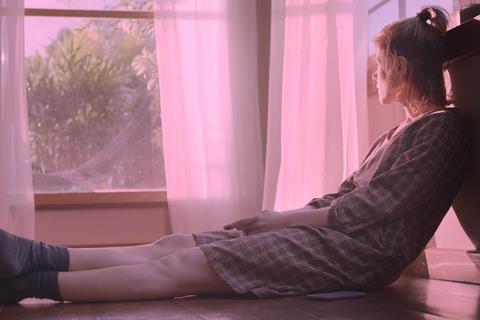 For any director, it might both be a blessing and a curse to make a film that perfectly catches the tone of its historical moment. Brazilian drama The Pink Cloud, writer-director Iuli Gerbase’s uncannily prescient debut, has accidentally made what could well be the definitive fictional statement about the experience of Covid-19 lockdown. That will make this powerfully imaginative film a significant talking point after its world premiere in Sundance’s World Cinema Dramatic Competition – and the film is likely to be a key reference when the history of Covid-era cinema is written. Conversely, Gerbase’s insightful, quietly unsettling picture may, right now, be too close to the bone to attract viewers desperate for hard times distraction; but it deserves exposure, and should attract niche sales both on the strength of newsworthiness and on its considerable cinematic achievement.

An investigation into the human condition and our adjustment to the unimaginable – whether that’s a sign of docility or of resilience.

An opening caption points out that the film was written in 2017 and shot in 2019 – which makes its resemblance to current events all the more eerie. The premise is absolutely simple: a mysterious pink cloud appears that kills anyone exposed to it in 10 seconds flat. In Brazil, and seemingly the entire world, everyone is forced to shut themselves indoors (the noxious vapour can’t penetrate cracks in windows: one of the absurd but convenient rules that we’re easily persuaded to accept). In the city of Porto Alegre, two single people, Giovana (Renata de Lélis) and Yago (Eduardo Mendonça), have just met and made out for the first time, and now must live together until further notice in Giovana’s apartment – like the many new couples who made the overnight decision to cohabit at the start of 2020’s lockdown.

Thrown together in not too cramped conditions – an airy, spacious duplex – the pair while away their time while adjusting to a new order that is concisely and sometimes wittily sketched out. People receive supplies, both basic and more elaborate, by drone, delivered through airlock-like holes in their windows, and – as we’ve all been doing - depend on FaceTime and similar channels for communication. Certain lines early on - “I’ve heard that it might go away during winter” – painfully echo our leaders’ conviction last year that it would all be over by Christmas. So it comes as no surprise that things go on much longer than expected. In fact, before we know it, not only is Giovana pregnant, but Yago is delivering her baby in an online-assisted home birth.

Gerbase establishes a sharp distinction between the world within the apartment and the exterior, with which the couple maintain a vital but tenuous connection. Just as their relationship constantly changes – they split up and reunite, their mutual dependence fluctuates, all in one space – so too does the wider world change, sometimes subtly, sometimes alarmingly. A generation has come to not only accept but even love the cloud, as the old world is gradually forgotten; Giovani even admits to nostalgia for the unease in walking home alone at night. Meanwhile, news from her kid sister Julia (Helena Becker), permanently staying at a friend’s house, suggests that social mores are changing radically.

There are glimpses of social breakdown, but Gerbase soft-pedals the apocalyptic to concentrate on life as experienced by her lead duo. Their shifting relationship to each other, and to the world outside, is dealt with in tart humorous touches – as in a brilliantly prickly scene, where the couple awkwardly attempt role-playing in a mocked-up disco setting.

Despite the premise, with its suggestion of environmental dystopia, this is not so much a science fiction film as an existential one, an investigation into the human condition and our adjustment to the unimaginable. In depicting the fine fluctuations of an otherwise monotonous ‘New Normal’, Gerbase shows our ability to accept the unacceptable – whether that’s a sign of docility or of resilience.

Gerbase’s leads are totally at ease in her huis clos setting. As Giovana, whose perspective the film largely favours, de Lélis is in turns weary, brittle and tender, often registering her emotions though fine-tuned signals - as in a deeply affecting close-up, showing Giovana’s reaction to a neighbour’s suicide. Complementing her, Mendonca gives a more reserved performance as a patient, bear-like, often bemused man who seems built for quiet tenacity.

Essentially a soberly staged chamber piece, the film plays occasional tricks, to mixed effect - a bouncy ‘life goes on’ ditty soundtracks a montage of circular pans, a third-person voice-over incongruously drifts in out of nowhere. The most striking narrative device is the canny, disconcertingly streamlined play with passing time. Nevertheless, despite its elisions, the drama does by the end feel a touch repetitive and over-extended – although that’s perhaps intrinsic to what it depicts.

The cloud itself, evoked through economical CGI, takes various forms, variously shown in candyfloss pink or in the sickly chemical shade of cheap supermarket rosé – and a consistent subtle tinge in Bruno Polidoro’s elegant cinematography means that we never forget its presence. Gerbase tightens the mood subtly and consistently in what feels very much like a contemporary version of The Exterminating Angel – with further echoes of another locked-in art film, Michael Haneke’s The Seventh Continent, although thankfully it’s never as bleak as that. The final shot leaves us hovering tantalisingly between despair and hope – something that should resonate with just about any viewer right now.