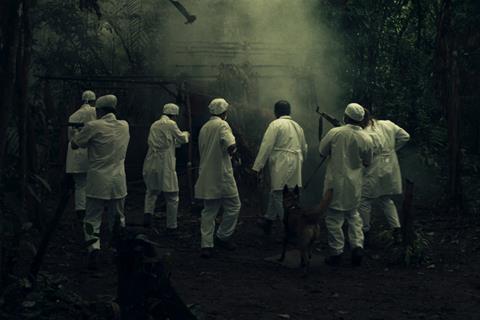 The Prey ticks all the boxes for genre fans. Feverish fisticuffs, ricocheting bullets, bloodshed, sadism, an indestructible hero and lip smacking villainy are all present in a tense, tasty action thriller. The zestful approach and well-sustained pace lend a blast of fresh energy to a tried and tested formula; genre festival screenings and decent commercial interest should follow in the wake of its Busan world premiere.

Following a well-trodden path that stretches from The Most Dangerous Game (1932) to John Woo/Jean-Claude Van Damme collaboration Hard Target (1993), filmmaker Jimmy Henderson has created a scenario in which the wealthy pay for the thrill of hunting down expendable human targets. There are twists along the way to keep it interesting.

Undercover Interpol operative Xin (Gu Shang Wei) is arrested during a police raid in Phnom Penh. He is subsequently sent to a dog-eat-dog prison where the warden (Vithaya Pansringarm) seems to have been watching too many Tarantino films, as he sways along to the music before gleefully torturing uncooperative inmates. Gaining a reputation as a troublemaker, Xin is subsequently one of a group of prisoners released into 30 kilometres of jungle wilderness. His one chance of survival is to outwit and out-run a trio of heavily armed hunters comprising Mat (Byron Bishop), Payak (Sahajak Boonthanakit) and the psychotic T (Nophand Boonyai).

The Prey operates on a simple kill or be killed premise, but you can almost sense everyone straining to give it their best shot. Nimble camerawork from Lucas Gath ensures that the viewer never feels at ease. He weaves and bobs with the camera, shoots from unexpected angles, shows Xin’s perspective when he is behind a hood and allows a blood splatter to spray the lens.

As director, editor and co-writer, Henderson does a thoroughly professional, committed job with his ingredients. He never lets the pace falter and features an inventive array of makeshift weaponry, from a tree branch to a catapult and an energetically wielded trouser belt. Gu Shang Wei makes for an implacable hero and Vithaya Pansringarm (also credited as a script supervisor) clearly relishes his role as the corrupt Warden.

The Prey doesn’t entirely avoid cliche, however, and even seems to be cheerfully embracing it at times. Guns conveniently jam at life-threatenting moments, baddies chomp on cigars, testosterone levels rise in the prison scenes and Dy Sonita’s token female character Detective Li is pretty much just along for the ride. Nonetheless, the many fight scenes are exciting, and there is a growing tension as Xin finds the odds increasingly turning against him. You are left wanting to know what Henderson might do next.