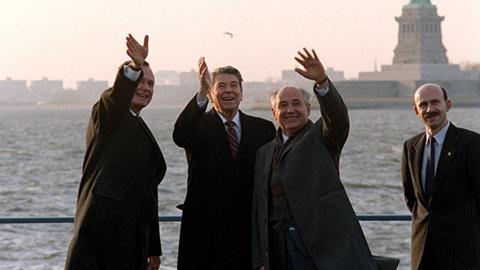 There’s an otherworldliness to the video footage of Ronald Reagan’s presidency that makes The Reagan Show feel like an elaborately-constructed parable for the Trump era. Did this really happen? Was his presidency, in truth, a not-particularly elaborate, eight-year stage show comprised of dubious scripts and staged photo ops? Directors Pacho Velez and Sierra Pettengill trawl through a thousand hours of White House TV (WHTV) footage and combine these clips with news reports from the era to present a fascinating look at Reagan as he dealt with another grandstanding showman, Mikhail Gorbachev, in the heat of the Cold War.

The Reagan Showdemonstrates clearly that fakery, manipulation and ad hominem politics in the TV age are nothing new.

The parallels with the current inhabitant of the Oval Office are intended and ubiquitous. The folksy Reagan, we’re reminded from old footage, had “the capacity to inspire”, but “he was always out of touch, he was never in charge”. The plaid-loving former actor spent one day in every six on vacation, and frequently had to be prompted by his wife, the skeletal, adoring Nancy. A B-list movie star, he loved a good line and repeated them endlessly (“doveryai no proveryai”, meaning ‘trust, but verify’) in what was actually a dangerous game of oneupmanship with the former USSR. Although this doc is slender, it’s also fascinating, playing into nostalgia and current-day politics in equal measure. International festival and TV exposure looks assured.

The strength of The Reagan Show is that it restricts itself to the idea of Reagan as an actor playing with the script of a lifetime, the White House as a stage, and the nuclear race as the play at hand (Reagan himself talks of the Moscow summit in 1988 as “saving something for the third act”).  His presidency looks so dated now, it seems naive and unreal – the graphics for his Strategic Defence Initiative (“Star Wars”) are on the level of a cheesy Atari game, but, of course, they were state of the art at the time.

The Reagan presidency, we are reminded, was the first of the true media age – WHTV generated as much footage during his era as the previous five administrations combined.  The viewer is given some brief background  - the Hollywood career, the marriage to Nancy – before vaulting into the White House, setting up the stage and showing how Reagan played on patriotism and paranoia to throw the country into a morbid fear of nuclear war. “There have been times in this office where I’ve wondered how you could do the job if you hadn’t been an actor,” he confesses. Although much of the footage was taken during his early-70s, Reagan looks old and empty when the camera’s not on, only comfortable when he’s feeding off an autocue. Gorbachev, meanwhile, was young and vital.

While not drawing razor-sharp parallels with the current administration – the darling of the Republican right, they still damned Reagan for being a pacifist when it came to passing a nuclear disarmament treaty – The Reagan Show also blisters with nostalgia. There’s his Veep lurking impatiently in the background, a vital-looking George Bush; there’s Joe Biden, backing Reagan’s peace moves; a young Dennis Healey, Michael Heseltine, Margaret Thatcher of course, the pugnacious reporter Sam Donaldson, TV’s glamorous Barbara Walters.

Editing is smooth and pointed, while Laura Karmpan’s score delivers occasional ominous undertones. Although The Reagan Show briefly takes in the arms-for-hostages scandal, this isn’t a full historical account, restraining itself to presenting the man as a showman who meets his match in the charismatic Gorbachev.

It also clearly indicates that whatever politics brought Trump to the White House, they’re nothing new. The Reagan era was made for the camera, his presidential stance a series of carefully controlled photo ops. Even the endless images of “the Reagan’s” [sic] down home on their ranch are completely staged - Nancy wasn’t comfortable on a horse.  “This is not for me, honey,” she can be heard to say as she perches uncomfortably for a photo shoot. As in many incidents when the camera isn’t rolling, he simply doesn’t respond.

The Reagan Show demonstrates clearly that fakery, manipulation and ad hominem politics in the TV age are nothing new. (Nancy interrupts a press conference and a difficult question by presenting Ronald with a birthday cake.) As Bush 88 takes to the stage at the end of this fascinating documentary, viewers can console themselves with the clear fact that while it seems so naive now, the same “Show” is still playing, only with different actors. And we’re still here, despite it all.