An intriguing, ambitious debut from Canada’s Mark O’Brien, consumed with guilt and matters of faith 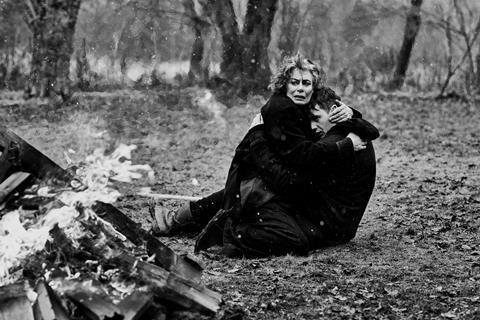 Your sins will always find you out in The Righteous. Actor/director Mark O’Brien’s feature debut is an intriguing, ambitious psychological thriller steeped in matters of faith, conscience and divine intervention. The theological tussles and low-key, slow-burn approach create an offbeat chiller that lacks the sensationalistic elements or intensity that might more readily grab genre fans.

For most of the film, O’Brien is more concerned with spiritual anguish than visceral thrills

Filmed in crisp, bright black and white, The Righteous has a period feel even though it is set in the present. O’Brien makes some use of genre tropes, from Andrew Staniland’s jangly, ominous score to images of a remote house silhouetted in moonlight that looks like it might be home to Norman Bates. Mostly, he travels a less-obvious route.

In a corner of Newfoundland, former priest Frederic (Henry Czerny) and his wife Ethel (Mimi Kuzyk) are grieving the loss of their adopted daughter. Frederic seems especially hit by her loss. Said to be suffering from “mind lapses” and spells, he is visited by sightings of the dead girl (shades of Don’t Look Now). He blames himself and is desperately seeking some form of penance or punishment. The subsequent storyline suggests that he really should have been more careful in voicing those wishes.

Shortly after the burial of their daughter, an injured Aaron (O’Brien) stumbles onto their property. Unblinking, fidgety and garrulous, he seems unwilling to reveal much about himself. “Where are you from?“ he is asked. “Everywhere,” comes the enigmatic reply. Most people would be calling the authorities at this point, but Frederic dismisses any misgivings and invites Aaron to spend the night. There is something in the young man that speaks of redemption. Is he angel or devil? “Thank God I found this place,” he remarks. Aaron charms his way into the good graces of Ethel, but his relationship with Frederic is more challenging. Their talk of sin, guilt and salvation prompts a number of revelations about Frederic’s past.

Working from a modest budget, an inventive O’Brien places his faith in a wordy screenplay and the strength of the performances. Key moments in the film come down to two people talking across a kitchen table with changes in lighting to convey shifting moods. He provides a showcase for himself and the other actors with a static camera focused on them as they deliver lengthy anecdotes, memories or tangled justifications for past acts. Czerny brings gravitas to a man burdened by the weight of his guilt, and Kuzyk is an especially warm, sympathetic presence as the good-hearted Ethel, leaving you wanting more of her character.

In the last 15 minutes, The Righteous turns up the heat and embraces some of the hysteria that has been kept in check up to that point. The supernatural is manifest and blood is shed, but for most of the film O’Brien is more concerned with spiritual anguish than visceral thrills.