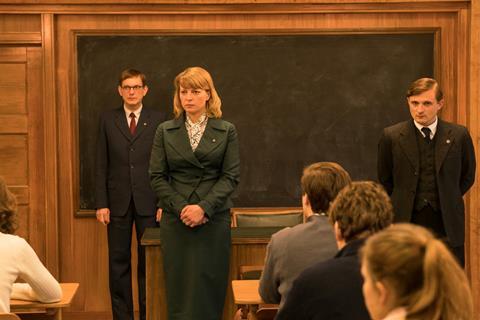 Berlin, 1956. Five years before construction started on the Berlin wall, and the border between East and West is still open to those who have a persuasive cover story. Teenage schoolboys bunk across to oggle consumer goods and the breasts of movie stars. But this is a border which is permeable, not just to people, but to ideas — the kind of ideas which are perceived, by the twitchily defensive communist officials, as counter revolutionary. This factually-based drama is an account of a well-meaning act of solidarity with the Hungarian Uprising, which ends with a whole class of school kids expelled.

A boisterous, initially overbearing score is toned down as the students gradually realise the gravity of their situation.

Although lacking the nail-biting tension one would expect from a GDR-based story which pits kids versus communists, this is a solid, good-looking piece of filmmaking which is elevated by a clutch of strong performances from the young cast. Unlike the headstrong  teen protagonists,this is not filmmaking which takes risks, nor is it overburdened with passion. It is, however, an enjoyable watch which gives an insight into the complex relationship between Cold War-era GDR and its younger generation. Interest will be keenest in German-speaking territories – the film is released in Germany and Austria at the beginning of March. Elsewhere, the charismatic young cast will likely be its most alluring marketing tool. Following the film’s premiere as a special gala in Berlin, further festival interest seems likely.

Based on an autobiographical book by Dietrich Garstka, the film shares much with director Lars Kraume’s last film set post-WWII Germany, The People vs Fritz Bauer. Both are handsomely mounted period pieces and, although one unfolds in the west and one in the east, both tap into the nervy paranoia of countries still dealing with recent history. And both capture the sense of hastily buried family secrets which can be weaponised at will by the unscrupulous powers that be.

We are introduced to Kurt (Tom Gramenz), the son of a high-ranking communist, and Theo (Leonard Scheicher, particularly impressive), the son of a steel worker, as they lie their way across the border to catch a forbidden movie which is rumoured to contain nudity. But, unexpectedly, the schoolboy thrills are overshadowed by newsreel footage which gives a harrowing account of the Hungary’s attempt to oust the occupying Soviets. Chafing under their own occupation, the boys identify with the rebels, and in a bout of teen fervour, persuade their fellow students to hold two minutes of silence during class.

The school principal hopes to keep the incident under wraps, but the situation escalates and soon the Education Minister (Burghart Klaußner, with an intimidating performance which crashes into the film like a headbutt) is demanding the names of the ringleaders. The students’ high school diplomas – their tickets out of gruelling blue collar drudge work like that of Theo’s father – are used as leverage. A boisterous, initially overbearing score is toned down as the students gradually realise the gravity of their situation.

As Kraume juggles his ensemble cast, a few balls go astray. Several key supporting characters disappear rather abruptly – an uncle who lets the kids listen to the forbidden West German radio station RIAS is one; a fervently communist student is another. But ultimately, it is Theo and Kurt whose stories we follow, and whose friendship is tested to breaking point.

Screenplay: Lars Kraume, based on the book by Dietrich Garstka