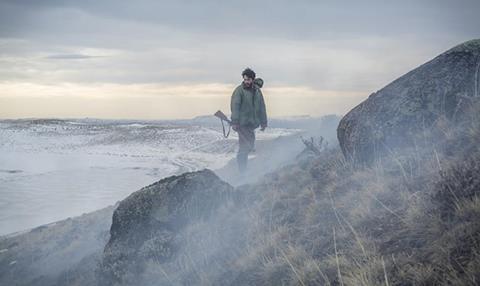 Men may set their craggy faces against the elements – and each other – but the relentless tide of progress and globalisation reaches as far south as deepest Patagonia in Emiliano Torres’ austere parable The Winter (El Invierno), which shared the Jury Prize at San Sebastian this year as well as Best Cinematography for impressive work by DoP Ramiro Civita before moving on to compete at Zurich.

Sound and images take to the fore as the director lets the wind batter through Civita’s lucid framing.

Set largely on ranch in the windswept Santa Cruz, the film’s relentlessly stark tone will make it a chilly prospect for wider audiences, but there’s a good story in here and it’s pleasingly well-told for those who wrap up warm for the trip. With his directorial debut, veteran AD Torres keeps the proceedings dark and taut; the result may feel familiar to those who have journeyed cinematically into recent Latin arthouse, but the central yarn is more compelling than initial sequences of hardscrabble lives dwarfed by nature might suggest.

The imagery dominates the film’s players, as the Pampa gives way to the Andes; Torres sets the action on a remote Estancia which is dependent on the sheep business. It is guarded by the taciturn elderly rancher Don Evans (Alejandro Sieveking) and his four dogs. When he picks up the new ranch-hands for the shearing season, he’s quick to establish order – the work is 5-5, and no wine, parties, or gambling are permitted. “You don’t leave until I kick you out,” says the solitary foreman.

But there’s a new kid in town:  Jara (Cristian Salguero), or “Corrientes”, the place on the Paraguay border where he hails from. The young ranch hand soon proves himself quietly able around the farm and catches the eye of the owner, who ominously talks about Don Evans’ old dog being “lost on the way”. Evans is quick to catch on to the threat posed by the younger man, but progress is inevitable. There are new owners and Jara is quickly promoted, while Evans is forced to move back to the city to resume the little that is left of his life. He may not, however, give up without a struggle.

With Santa Cruz becoming more and more dependent on tourism – the glacier beckons more tourists every year - this way of life seems increasingly outmoded, and the series of sacrifices Jara is forced to make won’t stand in the way of change, says Torres, who draws on classic Western imagery in his climactic sequences.

Sound and images take to the fore as the director lets the gales batter through Civita’s lucid framing. Make no mistake: it’s a tough man’s life down here, where his best friend is his dog  – a couple of hookers flash past, and a pregnant wife makes a brief appearance, but otherwise there is no female prescene. The Winter is clearly no Bombon El Perro either: Torres seems to suggest that death may be the only escape from globalisation in a film which is bereft of any sign of humour. Whatever the case, the stakes are high throughout The Winter, and the director raises his game.

Apart from the San Sebastian prizes, The Winter took the two top awards at the 216 Toulouse Films in Progress initiative.