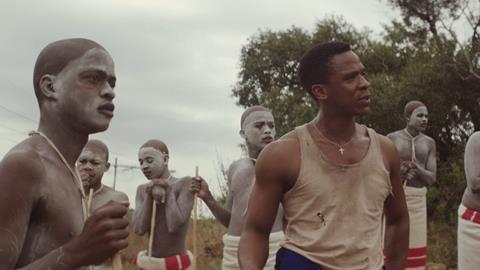 A traditional rite of passage is the catalyst for exploring conflicting notions of what it means to be a man in The Wound, an assured first feature from writer-director John Trengove. The initial promise of a South African Brokeback Mountain broadens into a measured consideration of class, race, self-loathing and self-assertion in a compact but pleasingly complex drama that should be especially welcomed by LGBTQ audiences and niche distributors.

Trengove briefly contrasts the soulless routine of city life with the elemental call of the wild before setting the bulk of the film in the remote mountains of South Africa’s Eastern Cape. Factory worker Xolani (Nakhane Toure) leaves his daily job in Queenstown to serve as a caregiver to one of the teenage initiates undergoing a Xhosa ritual of circumcision and forest retreat to mark the passage from boyhood to adulthood. Kwanda (Niza Jay Ncoyini) is a rich Johannesburg boy who has already attracted his father’s ire for his “soft” city ways.

Xolani’s ulterior motive, however, is his annual reunion with fellow caregiver Vijami (Bongile Mantsai).Trengove makes it clear that Xolani is more emotionally invested in the relationship, gazing upon his lover with a puppy dog devotion that the brawny, married Vijami seems unable to reciprocate.

Kwanda readily picks up on the bond between the two men, but Trengove (who also co-wrote the screenplay) avoids the obvious melodramatic option of having him threaten to expose them. Instead, Kwanda proves unexpectedly strong; defiant in reply to the bullying of his fellow initiates and encouraging in the way he urges Xolani to move away and find himself a better life. In many respects, he might be a more ideal partner for Xolani, but the prospect of being true to himself seems to be beyond the factory worker.

The Wound is not without its predictable elements, and you always fear that it will end unhappily, but one of the film’s strengths is the quality of the characters. The brutish Vijami seems to have built his muscles and gruff personality as a defence against the merest hint of an accusation that he is not a real man. He initially seems the villain of the piece in his treatment of Xolani as someone he only uses for sex, but we come to see a more gentle, vulnerable side to him. Xolani is also someone we come to understand in greater depth; lonely, yearning but lacking that extra confidence to escape the shackles of his own self-hatred and the expectations of others.

The tensions and clashes between the trio create a degree of tension. The ritual obliges Xolani and Kwanda to spend time together in close proximity and Trengove constantly films them in a way that invites intimacy. Vijam also keeps an eye on Kwanda, encouraging the viewer to speculate that he may have an interest in the young man.

If the connections between the central trio are at the heart of the film then the wider focus is very much on contrasts between urban and rural, ancient and modern (the ritual is dying out among a younger generation), wealth and poverty. Kwanda is constantly teased for his expensive trainers and privileged lifestyle but he also comes to embody a more forward-looking, progressive South Africa that starts to feel more and more like an impossible dream as the film unfolds.