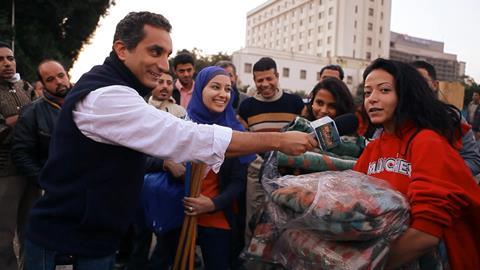 If the Arab Spring is near-dead in Egypt, at least it went out with a laugh.  That’s what we’re left with in Tickling Giants, Sara Taksler’s exuberant and tragic documentary about the rise and fall and escape into exile of that country’s leading satirist, Bassem Youssef. Taksler, a producer on The Daily Show, shows Youssef as a warmhearted and effortlessly amusing man, and his satire is the sugar coating around the bitter truth that democratic revolution has failed in Egypt and almost every other Arab country.

You can tickle giants (Egypt’s army and political elite), but they might do something less delicate back.

Tickling Giants should get a rousing welcome at festivals, and will make the rounds of American and British television, but its most ardent audience should be on Arabic-language TV, beamed from abroad to Egypt and other Middle Eastern countries. It is also an essential document on the role of media in the dynamic openness that was stifled by those who feared free expression in Egypt.

Ticking Giants is a tale about comedy and the pull of comedy on those who can’t resist performing it. Bassem Youssef, now 42,  began his working life as a heart surgeon. He jokes during operations, and laughs at a cameraman who faints at the sight of blood. As always, comedy works well with pain. Encouraged by friends, Youssef began a podcast, which became a hit television show, which became a success in several iterations, and then a political threat – all between 2011 and 2014.

Youssef is a natural showman. A scene where the Jon Stewart of Egypt (as he was called) meets the real Jon Stewart is a deft blend of celebrity infatuation and celebrity mockery. “He’s so cute, and he’s so short,” Youssef says.

Youssef’s satire, given the brutality of events which took place in Egypt, is remarkably gentle, although his ridicule of the elected Muslim Brotherhood leader, Mohamed Morsi, is nothing short of disdainful. Taksler observes him mostly in his home and in the television studio, cutting away to scenes of protesters being beaten and carried off, and to sidewalks at night where men smoking water pipes laugh at Youssef’s mockery of their leaders.

Earlier documentaries on Egypt’s upheaval – The Square by Jehane Noujaim (2013) or Back To The Square by Peter Lom (2012) – offered revelatory glimpses of people expressing themselves freely. Tickling Giants views that process through a single character with a huge audience, and watches as official disapproval leads two channels that broadcast him to take the funny man off the air, one after another. Like those previous  documentaries, Tickling Giants shows how a window of freedom and hope can unleash surges of creativity, like the improbable overnight success of a surgeon satirist.

It’s a long film, almost two hours, and could benefit from some editing. Yet the length and the film’s extended observation of events metamorphosing  into gags shows the vitality of independent media. The silencing of Youssef, once he’s abandoned by his second TV channel (and sued by his first), is a warning to anyone who puts into practice Youssef’s notion that freedom is measured by a country’s laughter. In other words, you can tickle giants (Egypt’s army and political elite), but they might do something less delicate back.

Production values are high for a film that has so much footage shot on the run.  Animation of clever cartoons by Andeel, a member of Youssef’s exuberant young team, enriches the visual mix.