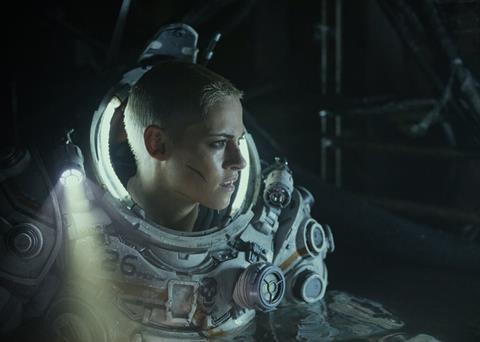 Those fearful of drowning, tight spaces or derivate horror movies will probably want to steer clear of Underwater, a shallow but effective blast of monster mayhem. Kristen Stewart ably plays a steely engineer fighting to stay alive on a deep-sea rig imperilled by nasty aquatic creatures, while director William Eubank freely pillages from the first two Alien films, The Abyss and Gravity for taut scares. Underwater is hampered by some of the genre’s silliest conventions — questionable character motivations, delusions of grandeur — but the movie nonetheless succeeds by capitalising on an elemental terror: underwater, it’s very hard to see the dangers right in front of you.

A funhouse of primal fears and obvious cinematic referencing

Opening January 10 in the US and February 7 in the UK, the movie will hope to harness Stewart’s commercial clout, although last year’s disappointing Charlie’s Angels (currently $59 million worldwide) suggests that the actress can only pull so much by herself. Vincent Cassel, playing the ship’s grizzled captain, has his own following, but word of mouth will be key, for better or worse.

Norah (Stewart) works as part of a drilling operation taking place seven miles below the ocean’s surface. After a freak accident cripples the rig, leaving only a handful of survivors, she and her remaining crewmembers realise that the cause of the disturbance was some sort of ferocious beast that isn’t happy to have these humans in its watery home.

Eubank (The Signal) does nothing to hide Underwater’s influences, offering a funhouse of primal fears and obvious cinematic referencing. The film isn’t even remotely original, but Eubank, cinematographer Bojan Bazelli and his three editors create a consistently nerve-racking experience, starting off with a gripping sequence in which Norah must act quickly to keep herself alive during the rig explosion. From there, Brian Duffield and Adam Cozad’s pithy script maps out a familiar scenario — Norah and the other survivors undergo a harrowing odyssey to reach an abandoned outpost where they might be able to radio for help — and then unleashes all types of horrors, killing off one ensemble player after another.

Underwater does a solid job emphasising the constant terror surrounding Norah. Not only are these crew-members stuck deep under the ocean, their oxygen running short, but they must journey through murky waters to their destination, rarely able to see far in front of them. This allows Eubank to repeatedly shock Norah and the audience with what’s just out of view, which makes the jump scares a little more organic than in most second-tier horror movies. In fact, not until the end do we get a decent idea of what these carnivorous critters look like beyond their rows of jagged teeth and icky tentacles.

To be sure, the characters are cardboard, and the supporting cast rarely rises above dull competency. (The low-water mark is TJ Miller, insufferable as the strained comic relief, reliably doling out lame wisecracks in every situation.) But Jessica Henwick is a worthy sidekick to Stewart, playing a grad student who finds untapped heroism during this ordeal. . And Cassel does project a certain amount of weary gravitas, his character hiding melancholy secrets that will be revealed in predictable fashion

When Underwater aspires to be anything more than B-movie escapism, it largely misfires. An attempt to flesh out Norah’s backstory adds little, and the story’s occasional nods to environmental woes — look what happens when humanity messes with Mother Nature — come across as half-hearted. And yet, Stewart’s committed performance somewhat sells the film’s pretensions. Norah is such a no-nonsense figure that she grounds this well-worn material. (And unlike some of Norah’s colleagues, she never does anything stupid, which leads to their inevitable, grisly deaths.)

Eubank adeptly dramatises the sweaty claustrophobia inside the rig — that sense that these characters are trapped under an unfathomable amount of water — and composers Marco Beltrami and Brandon Roberts create a mood of giddy sci-fi horror. And although there are plenty of loud scares in Underwater, Eubank also makes room for some judicious silence, letting the slow crack of the glass in a crewmember’s helmet send shivers of anguish through a viewer. This film owes a massive debt to better movies that came before, but Stewart and company tread water proficiently enough.