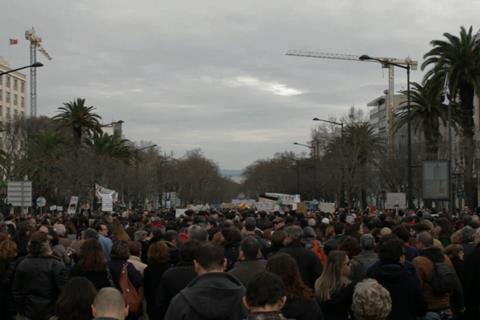 This enigmatic experimental picture threads actual footage of anti-austerity protests in Lisbon through glimpses of the uneventful lives of two characters with no apparent link to each other. Citizen journalist-style camerawork gives the street protest scenes a murky, diffuse quality. And the elusive central idea is as muddy and indistinct as the cinematography.

Challenging even for the most committed festival audiences, this is a film which offers scant satisfaction in return for the investment required to unpick its opaque meaning. As such, it is unlikely to travel far within the festival circuit and to resonate much outside a Portuguese audience which may be more finely attuned to its themes.

The protest is a motif which bleeds into the quotidian routines of a woman, Susana, (Silvia Figueiredo) and her dog. The shouts from the street drift through the window of her apartment; she stares impassively at news reports which speculate about skirmishes between protesters and the police. The woman attends a protest, loitering at the periphery before stalking away. A long unbroken shot captures her retreating back as she walks away across an expanse of grass.

We are introduced to another character, a pensive man called Jorge (Jorge Albuquerque), seen both as he is now and in flashback as a child. But the moments we are shown of both key characters are willfully banal. He blow dries a t-shirt with a hairdryer; she has problems with her washing machine. He practises martial arts; she burns her fingers when retrieving a dish from the microwave. He hovers awkwardly on the edges of a drinks party; she makes a phone call asking for payment for the translating work she completed a while ago.

Both characters seem to spend a lot of time lying down – on a bed, on the floor. There is a suggestion of Skype contact between them – not a conversation as such: on one occasion she languidly applies black lipstick, on another she smokes a cigarette while blindfolded. But, like everything in the film, this is not explicitly spelled out, just intimated.

In contrast to the street scenes, these shots are more carefully composed and lit. But with next to no dialogue, no musical prompts and a few too many shots of the back of people’s heads, we are given very little with which to work.