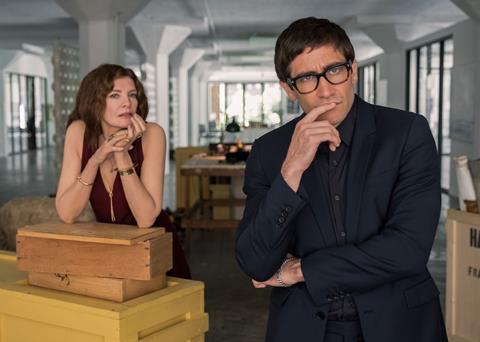 With his delightfully dark directorial debut Nightcrawler, Oscar-nominated screenwriter Dan Gilroy created a cynical satire about the predatory nature of the news and a meaty part for actor Jake Gyllenhaal as a sociopathic ambulance-chasing videographer. With Velvet Buzzsaw, an art-world parody and horror film rolled into one, Gilroy and Gyllenhaal reteam with far more mixed results.

A spiteful attack on the vapidity of the commercial art-world.

Set to be released globally on Netflix on February 1, Velvet Buzzsaw may get some curious eyeballs because of its genre elements and starry cast (Gyllenhaal is joined by Toni Collette, Renee Russo, and John Malkovich), but it’s ultimately a forgettable lark, amounting to little more than a spiteful attack on the vapidity of the commercial art-world. There’s nothing lampooned here that we haven’t already seen before, whether it be a pretentious art critic or avaricious art dealers. Gilroy’s only main innovation is finding new ways to kill them off. It’s a horror show that lacks broader social commentary; a handful of bloody murders and occasional jump-scares, with the occasional astute one-liner (i.e. “We peddle perception.”)

The haunting begins after Josephina (Zawe Ashton), an up-and-coming art agent, finds hundreds of paintings left behind when an elderly tenant in her building dies. The dead man gave instructions to destroy all of his art-work after his demise, but Josephina sees an opportunity. She begins to collect the paintings and show them off: to her powerful boss Rhodora (Russo) and her on-again off-again lover, the art critic Morf (Gyllenhaal), as well as a competing European dealer (Billy Magnussen) and museum curator (Toni Collette).

Quickly, the “outsider art” becomes the most coveted new work in town, but as the paintings become more famous, they also come with a body count. As Rhodora admits at one point, “All art is dangerous.”

Except for an art assistant whose main role is to scream after she stumbles upon another corpse, there’s not a single redeemable person in the bunch. By far, Gyllenhaal’s snobby bisexual critic is the most fun to watch. He saunters around with a mix of intellectual effeteness and condescending judgement (“The admiration I had for you is completely gone!”). In one tart response, he even condemns the colour of a coffin at the funeral of one of his colleagues. In another scene, we see him fully naked reclining on a lounge-chair, covered only by his laptop. And when Morf becomes increasingly unhinged, hearing voices and seeing figures in the paintings reaching out to him, Gylleenhaal excels at portraying bug-eyed panic and lack of control.

John Malkovich also shows up in an enjoyable cameo, appropriately cast as an aging erudite artist, stuck in a funk, and trying to find his way forward. (According to the film’s logic, it seems artists are immune to the evil spirits in the art-work.) Ashton and Russo play it mostly straight, as two unappealingly haughty women seeking money and power, while Collette’s ever-smiling duplicitous platinum blonde has more of a satirical edge.

While most of the film falls flat, there are a few clever art-world visual gags and astute strokes of parodic wit. Perhaps the funniest involves the dead body of Collette’s curator, whose contorted figure and pool of blood in an art gallery is mistaken for being part of the exhibit. Isis Mussenden and Trish Summerville’s nouveau-fashion costumes and James D. Bissell’s elaborate production design also helps to create a full-scale and highly detailed send-up of the film’s high-brow milieu.

But overall, Velvet Buzzsaw doesn’t cut deep enough. Then again, it could end up being some kind of culty cause celebre, elevated, ironically, by its very failures. In the words of critic Morf, “A bad review is better than sinking into the glut of anonymity.”