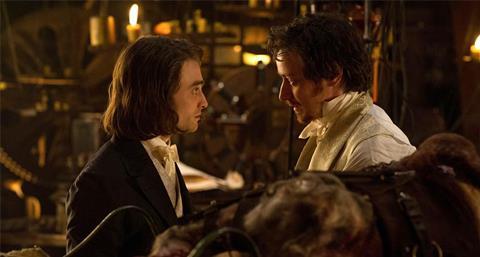 This bracingly gruesome revisionist spin on Mary Shelley’s classic gothic novel has no truck with Victorian propriety - it’s all about visceral thrills. Think steampunk gross-out; a version of the Frankenstein story which brings to the fore the body horror which lurks at the heart of the book. Early on, there’s a sequence featuring James McAvoy siphoning 18 years worth of accumulated pus out of Daniel Radcliffe’s back. It’s a staggeringly repulsive moment. But then director Paul McGuigan further twists the knife, adding a gleeful and horrible punchline to the scene. With this moment, he sets out his store.

The casting of James McAvoy and Daniel Radcliffe as, respectively, the idealistic but deranged scientist Frankenstein and his loyal sidekick Igor will ensure considerable audience interest. But while the film should earn plaudits for its visual impact and unflinchingly macabre approach, the fact that the character development plays second place to the spectacle may hamper the film’s prospects in the long term

We are introduced to Radcliffe’s character before he becomes ‘Igor’. Initially, he is a nameless hunchback, enslaved to a ruthless circus owner and bullied relentlessly by the other performers. But he is also the circus doctor – an autodidact anatomist who fills his spare moments, when not being booted in the behind and dunked in buckets of water, crafting detailed pen drawings of the human body’s inner workings. McGuigan animates these drawings, laying them over the characters and turning them into living scientific specimens. Igor is particularly interested in the circus trapeze artist Lorelei (Jessica Brown), both as a perfect physiological specimen and as an unrequited romantic ideal.

When Lorelei is critically injured, the hunchback medical genius meets the man who will give him a new life. Brilliant medical student Victor Frankenstein recognises a kindred spirit and a rare talent in the hunchbacked clown who saves the life of the injured woman. Victor breaks him out of the circus in a neatly choreographed chase sequence through the carnival burlesque backdrop of the sleazy side shows. Then, in the aforementioned pus-draining sequence, Victor cures him of his physical deformity, offering him lodging, the use of his library and the name – Igor Strausman – of his missing roommate.

From the teaming circus scenes onwards, Eve Stewart’s production design is a riot. Evocative Dickensian grotesquery and squalor is blended with a dense and detailed H. G. Wells-style proto-sci fi.The colour palette is full of rich, velvety pre-Raphaelite jewel tones. Then, as now, the London skyline bristles with cranes.

Igor is so grateful and flattered to be taken on as Victor’s protege, he manages to shelve his own reservations about the ethics of Victor’s projects. It’s only when he is attacked by ‘Gordon’, a reanimated hell-monkey made from bits of flayed zoo animals stapled together, that he starts to have doubts.

Victor’s out of school activities have also attracted the attention of one of Scotland Yard’s finest, and most devoutly religious detectives, Inspector Turpin (Andrew Scott), a man who has personal reasons to see Victor’s work as an affront. Victor, meanwhile, has his own (clumsily contrived) motivation for wanting to cheat the forces of mortality. And they have something to do with his father (Charles Dance, who seems to be cornering the market in ruthless patrician father figures).

This Grand Guignol riot of rotting animal and Godless creations is great fun. However, of the cast, it is only McAvoy, walking the line between madman and genius, who fully manages to hold his own against the spectacle with which he shares the screen.