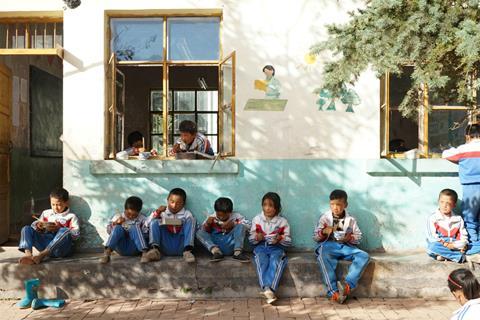 Wet weather might trouble the Tibetan villagers in Wangdrak’s Rain Boots, but the forecast is bright for this all-ages delight from first-timer Lhapal Gyal. With the helmer and screenwriter graduating from assistant directing duties on Pema Tseden’s Tharlo and Xuebo Wang’s Knife in the Clear Water to his own full-length effort — with the help of the former as a supervising producer — his accomplished debut streams with warmth and insight, offering an engaging tale of trying to fit in, an ode to the importance of dreams, and a kids’-eye view on tradition.

As plucky as its titular first-grader, not to mention as adorable, the film should find fine conditions on the international festival circuit following its competition in Hong Kong’s young cinema competition, particularly in youth-focused programs. Its central quest proves reminiscent of Haifaa Al-Mansour’s Wadjda (2012), while providing the type of textured societal observations at which both Tibetan and Chinese cinema have recently been excelling.

Played with an expressive air of innocence by non-professional newcomer Druklha Dorje, who lights up the screen amongst the feature’s mostly untrained local cast, Wangdrak wants nothing more than a pair of wellingtons. Sick of trudging through puddles on rainy days — and sick of the taunts of his classmates for his muddy footwear, as well as the reprimands of his teacher — his desperation oozes from every pore. When his best friend and neighbour Lhamo (Pakmo Yangdrom) lets him try on her boots on the walk home from school, he swiftly becomes a picture of pure exuberance.

Though Wangdrak’s mother Renjyi (Shanma Jyi) is supportive, his pleas don’t sway his stern father Khabum (Jinpa). Harvest season is almost upon Qinghai province, he’s in the middle of a fight with a fellow farmer over watering practices, and he doesn’t want to spoil the boy — he just bought him a wind-up toy frog, after all. A travelling vendor arrives with a pair of wellies that catch Wangdrak’s eye and, while another kid gets in first, Khabum tells Renjyi to trade their goat skin for sickles should the merchant return. She doesn’t listen, but once Wangdrak finally has his coveted boots there isn’t a rainy day to be found.

Drawing upon Tserang Dondrup’s short story of the same name, Gyal’s script is filled with gentle humour. There’s affable satire as it continually thwarts Wangdrak’s modest dreams  but it’s filled with empathy and affection, and steeped in the never-give-up attitude that’s so pivotal to such spirited tales. The same approach is evident in the contrast between the boy’s hopes of wearing his own rain boots in the right conditions, and the not-so-dissimilar situation faced by the adults in the community, who’ve tasked the local lama with keeping the skies clear for the sake of the crops.

The feature’s openness also abounds in its gleaming cinematography. Here, muddy tracks, grassy fields and bubbling streams are inviting playgrounds as well as everyday spaces, with cinematographer Lv Songye (Tharlo, Ghost in the Mountains) conveying both in the same shot. In the dim-lit, shadowy interior of Wangdrak’s family home, the commonplace can also appear extraordinary; the glow of the television screen flickers across the child’s face as he obsessively watches the nightly weather report. They’re perceptive visual touches in a film that delivers a rousing message: that even the most ordinary, seemingly routine dreams have value.

Screenplay: Lhapal Gyal, based on the story of the same name by Tserang Dondrup