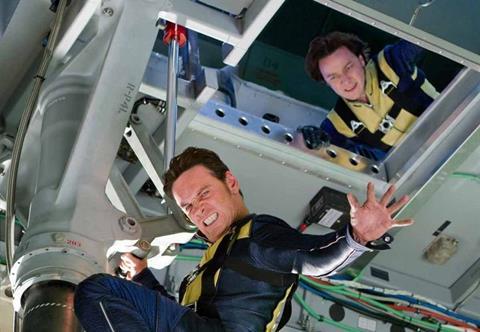 In 2000, Bryan Singer’s adaptation of the X-Men comic book series gave the modern superhero genre a kick in the pants, seeding action thrills with deeper ethical conflicts, and laying the groundwork for both the commercial success and some of the more artistic-minded noodling of a wide variety of genre followers.

A prequel to the original films, and presumably the beginning of a story arc that could stretch out over a trilogy of its own, X-Men: First Class doesn’t quite touch the inspired blend of brain and brawn that the best of its predecessors had to offer, but neither does it embarrass itself. It’s a slick piece of pop entertainment marked by smarter than average characterisations and some solid performances, and it shows that mainstream studio films can indeed, with some effort, accommodate muddied heroic intentions.

With the inclusion of 2009’s X-Men Origins: Wolverine spinoff, the X-Men films have grossed over a combined $1.5 billion in theaters, almost perfectly halved between domestic and foreign earnings. First Class looks to be another monster performer for 20th Century Fox, capturing low- to mid-nine-figure theatrical returns and enjoying a healthy life in ancillary markets.

Charting the beginning of the X-Men saga, in which factions with special mutant abilities largely square off against one another in a still recognisably human world, the movie unfolds against the backdrop of the Cuban missile crisis. Before they adopted the monikers of Professor X and Magneto, Charles Xavier (James McAvoy) and Erik Lehnsherr (Michael Fassbender) were not archenemies, but instead friends aligned against a common foe. Genetic scientist and mutant Sebastian Shaw (Kevin Bacon) killed Erik’s mother in front of him when he was but a boy, and then used the research advances he discovered to arrest his own aging process.

When a CIA investigation co-headed by Moira MacTaggert (Rose Byrne) uncovers some dastardly scheming by Shaw, she solicits the professional advice and assistance of Xavier, who eventually reveals his extraordinary telepathic gifts. With the American government’s partial cooperation, Xavier finds and recruits other genetically altered individuals, in an effort to stave off Shaw’s plan to foment nuclear war between the United States and the Soviet Union. Their plans dovetail with the more personal vengeance of Lensherr. Though he joins nascent organisation’s quickened training regimen, Lehnsherr is more skeptical of the government than Xavier, believing that the mere existence of one mutant threat will be used, perhaps sooner rather than later, as justification by humans to round up all mutants.

While the script departs somewhat significantly from the comic book source material, especially as it relates to the villainous character of Shaw, for viewers either less familiar with or invested in the alternate world in which X-Men unfolds, the choice of such a known, global-stage confrontation presents a few problems of emotional involvement, not the least of which is a firmly established outcome. Atomic energy is also tabbed as having exacerbated mutant development, but never really explored in interesting depth.

For the most part, however, First Class overcomes these hurdles with a superior presentation of various inner conflicts, including those of shape-shifter Raven (Jennifer Lawrence), and a slowly escalating tension between Lehnsherr and Xavier. The series’ same undertones of sexual, racial and sociocultural discrimination and alienation are also present, for those who want to read into them.

Hearteningly, director Matthew Vaughn and his team don’t overburden the action with bloated set-up or explication of mutant powers. While there is a scene which explores the individual gifts of the new team of young recruits, it plays so well because these are basically the equivalent of teenagers showing off for one another.

The real world backdrop isn’t realistic per se, but it does provide a grounding influence to the various mutant abilities. John Mathieson’s cinematography and Chris Seagers’ production design strike a nice balance between capturing and conveying the known and the fantastical.

The film’s special effects work and technical polish are equally superb. The diamond-morph skin of villainous Emma Frost (January Jones) is striking, as are an early sequence in which Lehnsherr rips an anchor all the way through a boat and a finale in which Lensherr tests his powers against Shaw’s special submarine.

The performances in superhero movies, especially ensembles with as many characters to service as this one, usually trend toward the soporific, but there’s a solid, almost across-the-board level of heartfelt engagement here. In particular, McAvoy and Fassbender each deliver fine, captivating turns. The former ably communicates Xavier’s goodheartedness with a bit less on the written page than one might like, while burgeoning talent Fassbender, showcasing an appealingly dangerous, quicksilver charm, forever settles the actor-versus-movie-star argument surrounding him: he’s both.