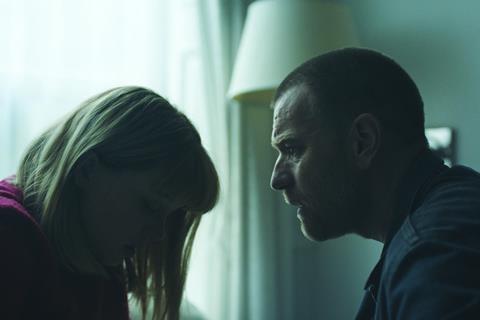 In Zoe, robots called synthetics look and talk and move exactly like humans. The problem in this grey-toned tech-romance by Drake Doremus comes when love enters the equation in a film which which holds no surprises on either the synth or human front.

The constant brooding talk of man-robot bonds can feel as we’ve leapfrogged not into the near future, but back into a French film from the early 1960’s

While the end result is more tender than tech, twists in the script by Richard Greenberg could rope in a young crowd which is drawn to “can-you-top-this” cyber tales. And the drama’s surprisingly traditional love story between human Ewan McGregor and synthetic Lea Seydoux could connect with a slightly older demographic. Amazon’s acquisition of Zoe will help at festivals and on every other platform, as will Christine Aguilera’s fleeting (non-singing) appearance as a synth prostitute.

Zoe (Seydoux) is a product of Relationist Labs, where divorced, dour and dedicated robotics engineer Cole (McGregor) designs “synthetic companions” to help clients optimise their relationships. Besides looking human, the beautiful Zoe has advanced intelligence, emotional depth, and humour. When she takes her firm’s compatibility test, and scores 0 % with Cole, her colleague, the hint of an office romance seasoned with sci-fi swerves into a crisis of the heart. Their affair takes us into a drama where the murky area between human and robot turns out to be as flesh and blood as in any love story, despite a seductive array of fascinating robotic wrinkles.

Zoe and Ash (Theo James), another smart and sensitive synth at Relationist Labs, are acutely aware that being robotic makes them expendable. We see the fate of timeworn synths when Cole and Zoe visit a basement brothel (designed with less imagination than the robots) where black-haired synth Aguilera serves customers in a Moulin Rouge costume. The madame in charge notes that once the bordel synths show signs of wear, they are repurposed (taken apart) or thrown out on the street. If love stymies the synths, so does robot mortality. Recent arias on this theme include both the TV series (and source film) Westworld, and Alex Garland’s Ex-Machina, in which the android was also played by a European actress (Alicia Vikander).

Doremus shrouds his story in grey-on-grey interiors, as Dan Romer’s ominous music propels Cole and Zoe into the push-pull of love rather than into any tech-scape. The constant brooding talk of their man-robot bond can feel as we’ve leapfrogged not into the near future, but back into a French film from the early 1960’s. There are Pygmalion allusions (too obvious to be stated), yet much of the tech territory from films of the last decades goes unreferenced. Both McGregor, close cropped, and Seydoux, in retro bangs, give tender performances, although there’s not much that’s new in the love story once you push the robotics aside. Tech-heads who rush to Zoe may leave the theater feeling under-charged.

What’s novel is the film’s sub-plot about a miracle drug that produces the feeling of falling in love in the human couples that take it. Benycin, as it’s called, is an instant cure for loneliness and creates the illusion of warmth between strangers who share their doses. No surprise, the drug also wears off, and scarcity threatens a new drug crisis, a topical element given today’s opiate plague. Yet the more sinister threat in Zoe is that the reliance on Benycin among lonely humans is making relationships robotic.

Doremus is a prolific indie, and his films range from juvenile nastiness (Douchebag, 2010) to dystopian (Equals, 2015) to a stab a year ago at digital relationships (Newness, 2017). His trademark rawness is evolving into something resembling maturity, sort of like settling down with the right robot.