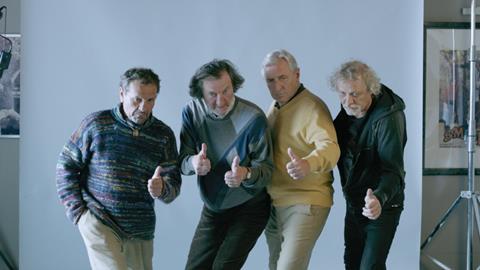 A harmless frolic bearing all the earmarks of a ready-made home territory blockbuster, this tale about the comeback of a once popular rock band, 40 years after they had disbanded may some darker moments, but this never harms the general cheery mood - it is just there to remind the audiences that life is never easy when you are a sexagenarian.

The cast breeze through the high tale without ever taking it too seriously, the new songs may not break into the international charts but are easy on the ears and the plot moves ahead briskly to prevent its predictability.

A collection of veteran top Czech movie stars share the credits, a brand new upbeat score has been added, a plot has been concocted out of thin air and it only remains to be seen whether the glow of the whole enterprise will shine as brightly once it tries it chances abroad.

The plot goes like this. ‘Smoke’ used to be a famous band in the early 1970s, they wrote and performed their songs in English to the great annoyance of the official party line, therefore gaining some kind of dissident reputation, which they never really deserved, since politics were never part of their agenda.

Now, Vaclav (Bolek Polivka, best known for such films as Divided We Fall and Pupendo) teaches violin to kindergarten kids; Milan (Karel Hermanek who played in Kolya) runs a bankrupt recording studio; Karel (Miroslav Krobot of Alois Nebel) has married a New Age wife; Yvonne (Zuzana Bydzovska from The Country Teacher) who makes his life a misery and only Ota (popular TV star Marian Ginsberg) has remained his own incorrigible self, drinking and womanising despite his age, as if ignoring the passing years.

Vaclav, married to a much younger wife, just had a baby and desperately needs money. In comes the group’s former agent, Holubec (Richard Genzer) who suggests that a reunion of the old team, to be cleverly sold to the public as only he can do it, might save the day. To convince the others to join in, Holubec invents - and Vaclav goes along with - a story whereby recently widowed Vaclav, terminally ill but hiding it, needs the support of his old friends one more time.

This is enough to break down whatever resistance the other band members might have, and the whole project is put on the road, with Holubec’s daughter Miriam (Jenofeva Bokova who starred in 4some) to manage the resuscitated band. Just to throw another spanner in the works Vaclav has a son, Vojta (real life rock star Vojtech Dyk), who thinks his dad is shaming his late wife’s memory.

Nothing less than success can come out of such an opening gambit. Granted, some feathers will be ruffled, some husbands will be cuckolded, agents will do what they do best (cheat on their clients) but Smoke is definitely back in all its glory. Sure, 60 being a dangerous age don’t expect all the heroes to come through in one piece, but that’s par for the course. The weather is always nice, the products of the Beatlemania age are still in fashion, Paul McCartney is still a star…not to mention the Rolling Stones, whose Mick Jagger is the model for Ota’s character and stage performance.

The cast breeze through the high tale without ever taking it too seriously, the new songs may not break into the international charts but are easy on the ears and the plot moves ahead briskly to prevent its predictability from disturbing the audience too much. Veteran producer Rudolf Biermann who put the package together and writer/director Nellis, who delivered it safe and sound the public, should get equal credits for pulling it all through.