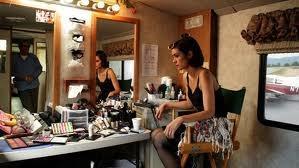 A tricksy film-within-a-film crime drama, Monte Hellman’s return to feature direction more than 20 years after his last (a straight-to-video slasher flick) and almost forty since the cultish Two-lane Blacktop,  feels like a polished student exercise. It’s a cold and sometimes gauche film that never quite reaches out to embrace its audience, but the receding-mirrors story and Twin Peaks atmosphere has a certain intriguing something that keeps us watching.

In the end the whole exercise all feels a little too stiff and awkward to really work.

Scripted by Variety’s executive editor Steven Gaydos (and featuring a cameo by the same publication’s Peter Bart, playing himself), Road To Nowhere’s film industry setting feels fairly authentic and even generates a few laughs – something that helped ease the film towards a warm reception at its Venice festival premiere. But no such insider privileges will be on offer in the indifferent marketplace, where the film is going to have to nuzzle into metropolitan rep cinemas and arthouse screens on the wing of Hellman’s cult reputation and the prayer of its sub-Lynchian echoes.

Road To Nowhere begins with an interview with Mitch Haven (Runyan), the young bratpack director of a film called ‘Road To Nowhere’. As he is being interviewed, we home in on the laptop screen where a scene from his film is playing – until one screen fills the other and we’re locked in behind a double wall of illusion. It’s a nice moment, and despite some confusing plotting the film is good at generating intrigue and tension from the interaction between its two main layers – the story about the casting and production of the film Haven is making; and the story inside his film.

Haven’s Road To Nowhere centres on a double suicide that, we are told, was a big news story in North Carolina. The apparent victims were a bribe-taking North Carolina politician who is in trouble with the tax authorities, and his beautiful young assistant and (we assume) lover, Velma Duran. It takes us pretty much the whole film to piece together the details of what actually happened on the night of the suicide or crime – and even then there are missing pieces, which the generous viewer will put down to deliberate ambiguity and the rest of us to poor writing.

Meanwhile though, Haven is casting the film, and his choice for Velma falls on a complete unknown, Laura Graham (Sossamon). He flies to Rome to meet her, and the two embark on an affair with improbable haste in one of the film’s least convincing passages. Soon scenes from the film that is being shot on location in North Carolina, with Laura as Velma and Cary Stewart (De Young) as her politico lover, alternate with scenes from life on and off the set, as Haven gives Laura a crash course in cinema in the hotel bedroom they share, showing her such classics as The Lady Eve and Spirit of the Beehive. Various locals with information on the real double-suicide hover around too – including smart and pretty local blogger Nathalie Post (Swain), whose articles about the incident inspired the script.

Some of the acting is wobbly to say the least; but Sossamon makes the most of her double life in the film, hitting the right balance between femme fatale and ingénue, between troubled actress and troubled character.

Once the action relocates from Hollywood to North Carolina, Hellman finds a dark, noirish style that pushes the woods, dams, lakes and country hotels of hick-land into a menacing register; and he’s good too at spinning out the mystery, keeping us guessing. But in the end the whole exercise all feels a little too stiff and awkward to really work – and when we start asking the wrong questions of the plot, its flimsy metacinematic house of cards comes tumbling down.