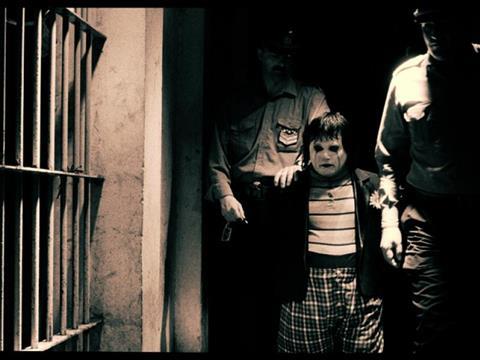 An astonishing Fellini-esque delve into murder, passion, betrayal and reinvention, Dario Nardi’s ambitious Sadourni’s Butterflies (Las Mariposas de Sadourni) is a beautifully strange and at times surreal bit of cinema likely to be a fixture on the festival circuit over coming months.

Beautifully shot and structured and packed with funny, strange and memorable moments.

The film, which had its world premiere at the Dubai International Film Festival, is a deliriously dark and often disturbing tale that will intrigue cinema lovers. Presented in lustrous black-and-white it is brimming with classic film references, mainly in its love for classic silent cinema. It is an odd story and an acquired one to be certain, but its sheer timeless oddness could well appeal to niche distributors.

The film opens briskly and violently to the point. Circus dwarf Sadourni (Cristian Medrano) recalls how he was sentenced to a lengthy prison term – it involves a magician, a robbery, a betrayal and catching his pregnant wife making love to another, leading to a brutal double murder – and how, having served half of his sentence he is due for temporary release thanks to his good conduct.

He is allowed to leave the prison on a daily basis in order to start re-joining society, but struggles to try and find a job (cue amusing scenes of him at a bar looking through a newspaper where all of the adverts are for ‘normal people’) and feels increasingly dissatisfied by his stature. At the circus he had a strong position, but in ordinary society he feels lost.

He finds a possible – though expensive – solution with Dr Simonki (Ale Sergi) who has developed a system to help him gain height through a strange stretching system, though to raise the money needed he capitalises on his condition as a dwarf by working for a fetish company, meeting Alexia (Antonella Costa) who works there and with whom he develops a strong relationship.

Eventually he breaks the conditions of his parole by confining himself to Simonki’s office to undergo the ‘treatment’, with the police hot on his heels and Alexia desperate to find out what has happened to him.

Beautifully shot and structured and packed with funny, strange and memorable moments, Sadourni’s Butterflies is always intriguing and unusual with Cristian Medrano impressive as Sadourni, a darkly determined character driven to violence who simply wants to fit into society. It is a complex and self-consciously surreal film, but certainly one that is relentlessly intriguing and stylish.