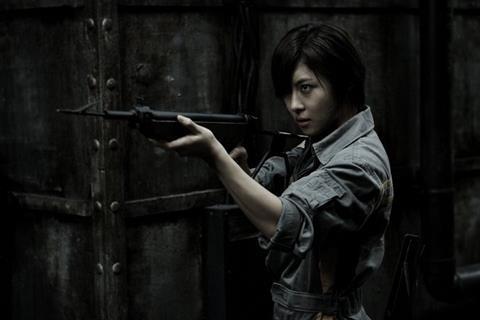 The big-budget 3-D Korean creature feature Sector 7 (7 Gwanggu) is an ambitious sea monster horror movie that has enough strong production work and impressive 3-D to interest genre audiences, but is eventually let down by its clichéd storyline and lack of chemistry between the lead characters.

Ha Ji-won has a certain feisty charisma and certainly does her best to hold the film together.

The film opened in Korea earlier this year to strong attendance and had a popular screening at the Tokyo Film Festival.  It is a bold attempt to ape monster movies of the past, and has enough twists, turns and gory violence to intrigue audiences and prove to be a regular fixture at genre festivals. Sales will come for agent CJ Entertainment to distribs looking for a mainstream 3-D horror movie, especially those who might have picked up on that other Korean horror flick The Host.

As with the Alien and Resident Evil films, the key casting decision is to have the lead a tough no-nonsense female character as the main protagonist. In this case of Sector 7 it is actress Ha Ji-won (who starred in horror film Phone and disaster movie Haeundae) as determined Deep Sea Equipment Manager Jae-Ju (nicknamed ‘Hardass’ by the crew) on board the offshore drilling rig Eclipse, a woman constantly battling with the indecisive management.

The arrival of Captain Jeong-Man (Ahn Sung-ki) to supervise the crew’s withdrawal gives her the final chance to press for a last attempt at finding oil. As well as eventually striking black gold, the drilling also unearths a rather hungry sea monster who is soon busy prowling the rig looking for lunch.

The crew try to fight back against the beast – cue shotguns, flame-throwers (the alien killing weapon of choice in most films) and harpoon guns – but the crew stand little chance against the powerful mutated sea monster, and it is left to tough-but-sexy Jae-Ju (who naturally favours snug white  vests and a scowl) to come up with a plan.

The crew are initially introduced by some rather heavy-handed attempts at comedy, and early on it is easy to see that the majority of them are simply there as monster fodder. So much is left un-developed – just why is she so determined to find oil (there is a strand about wanting to do it for her dead diver father, but all rather vague); what is the monster and why is it so nasty? Just what is the relationship between the crew members, and just why are there two motorcycles on board an oil rig?

The monster itself is nicely realised and the 3-D effective at times, but it all feels rather familiar. The initial scenes are all the early scenes of Armageddon before Bruce, Liv and Ben head off to save the earth…yes, oil rigs can be fun, especially when you have motorcycles on board and are fond of holding a barbeque on deck.

Ha Ji-won has a certain feisty charisma (and – without being too churlish – an odd running style) and certainly does her best to hold the film together. She has a determined sexiness and convinces as a tough woman who will do all she can to survive. Despite its familiarity – it could an episode of Doctor Who or Stargate – Sector 7 has a certain confidence in its determination to be an old-fashioned monster movie without any great attempt at subtext or sophisticated story.