Set Fire To The Stars 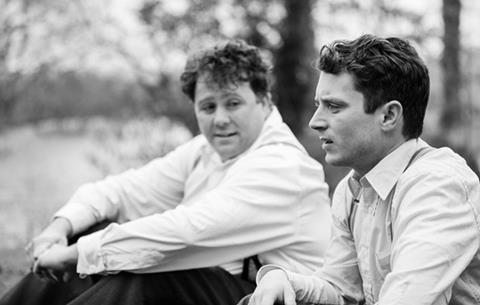 Beautifully shot and exquisitely designed, Andy Goddard’s intriguing and intermittently absorbing drama about poet Dylan Thomas’s booze-fuelled tour of America in 1950 makes for fine viewing and while it never completely works as an enthralling story, fine performances by Elijah Wood and Celyn Jones (as Thomas) will make it an appealing film for distributors and festivals.

There are times when the film soars with the strength of its ambition, but it also falters and splutters at times – leaving you to relish the cinematography, design and costumes.

The film dwells on the relationship between the tortured Welsh poet Thomas and his American agent John Brinnin (Wood), an academic and poetry tutor whose desire to see Thomas’s brilliance be appreciated via a series of readings across the US is hampered by the poet’s enthusiasm for the bottle. The film had its world premiere at the Edinburgh International Film Festival.

Beautifully shot in ‘scope black-and-white (and though shot in Wales, exquisitely production designed to look like 1950s America) Set Fire To The Stars is at its core a two hander between Thomas and Brinnin. The later is warned that Thomas’s self-destructive drinking would hamper his ability to speak at formal occasions, but the fan in Brinnin gets the better of him and he promises to keep an eye on this mercurial talent.

When Thomas’s drinking and carousing sees them ejected from his New York hotel, Brinnin takes the still drunk Dylan Thomas to a remote country cottage in am attempt to dry him out prior to an event at Harvard. This quiet time (well, interspersed with more boozing bouts in truth) sees the two men gradually bond and share some insights into what tortures both of them.

Kelly Reilly crops up briefly as Thomas’s wife, though in a scene where he reads a plaintive and angry letter from her in the woods and imagines her there with him, arguing, flirting and cajoling.  It is scene with some poetic energy, with Jones and Reilly impressive together.

Elijah Wood is suitably prissy as the rather proper and naïve John Brinnin, though often simply plays straight man to the broad – and often amusing – excesses of Dylan Thomas. Celyn Jones (also a co-writer of the film) has the girth, the energy and the delivery to work as Thomas though there are times when he can’t quite find the soul of a poet. There are times when the film soars with the strength of its ambition, but it also falters and splutters at times – leaving you to relish the cinematography, design and costumes but wish that the story wasn’t rather repetitive and not massively revealing of the lead characters real personalities. But then this is a snapshot of a very small period and should be appreciated for its style, rigour and occasional astonishing moments of poetical majesty.