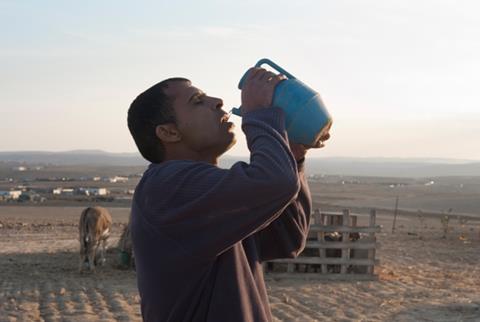 Though it may look like another topical picture on the Middle East conflict - Israelis on the one side, Arabs on the other - this spare, modest, thoughtful, slow-paced first film, with all its constant reminders of the violent climate in this part of the world, is much more about the fundamental cultural discrepancies that keep the two communities apart.

Livne uses a cast of non-professionals acting naturally as if there was no camera around, which imparts and even greater sense of documentary authenticity.

Requiring quite a bit of background information to tie up the loose ends of the sketchy plot, and insisting on a deliberately subdued tempo appropriate to its characters but not necessarily to the average Western market, Livne’s film should work well with specialised audiences interested in ethnographic studies rather than in sheer entertainment.

Livne’s documentary background is evident in his approach to the story of Kamel (Adnan Abu Wadi), a security guard in Beer Sheba’s central bus station, who lives in a shack, somewhere in the middle of the Negev desert, next to his brother Khaled (Adnan Abu Muhareb) and Khaled’s wife Nadia (Maysa Abdel Alhadi). Kamel, like many other Bedouins, has served in the Israeli Army, he has a natural gift for fixing TV sets and DVD players and spends most of his time in the hub of a busy town. He lives with one foot at least, in the modern world.

But for him, home is still the improvised desert hut, the kind his nomad forefathers had always inhabited since ancient times. His brother, however, rejects any attempt to change his way of life. He raises goats for a living, considers Kamel a traitor for mixing with the enemy - namely with anything that might endanger tradition - and will not allow his wife to waste her time reading books and consider the possibility of studies when she should stay at home and have children.

Threatened by a state order to pull down their homes which they had put up without a permit, Khaled, thinks that if he stages a terrorist attack and then pretends to prevent it, he might get the attention of the media and raise sympathy for his personal plight.

Imposing the pace of the desert all through the entire proceedings, Livne uses a cast of non-professionals acting naturally as if there was no camera around, which imparts and even greater sense of documentary authenticity, particularly in the portrait of Bedouin life. Managing to generate a feeling of a real cozy home in Kamel and Khaled’s ramshackle lodgings is the real achievement and seeing them torn down is actually heartbreaking.