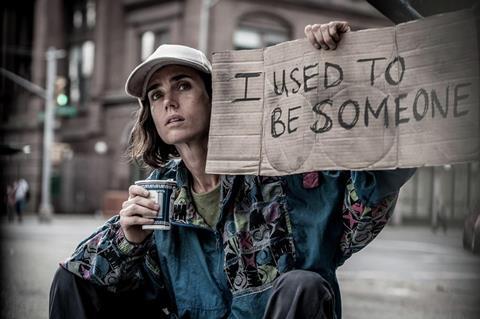 The glossy bleakness of actor Paul Bettany’s directorial debut Shelter (which he also scripted) is often at odds with his well-intentioned attempt to tell the moving story of how two homeless people coming from very different world find some kind of support and hope with each other. It is a great pair of roles for Jennifer Connelly (who, of course, is married to Bettany) and Anthony Mackie, though despite being beautifully shot it is often familiar fare that ticks lots of cliché boxes.

Connelly and Mackie are impressive. He plays Tahir as a calm and compassionate man with a dark past, while Connelly has the somewhat showier role as an addict who uses drugs as a way of dealing with her issues.

A rather tender love story set against the backdrop of the dour Manhattan streets, Bettany attempts to pull off the hard trick of adding romance to what at heart is a sad and rather grim story of two disenfranchised types. The film is littered with beautifully framed shots and moments of magical realism, all balanced dashes of gritty realism. It may well be a hard sell despite the high profile casting of Connelly and Mackie, though festivals may be interested.

Hannah (Connelly) and Tahir (Mackie) slowly bond when they meet on the streets. He wants to help her with her drug addiction, and while initially defensive she comes to rely on his help and support. She slowly reveals the traumas of her past while he is more secretive his origins. After stealing food they escape over rooftops and – rather conveniently – squat in a plush apartment, and start to live an almost ordinary life, dressing in the owners’ clothes, sipping fine wine, and dreaming of what could be.

But reality has to set in at some stage, and with winter closing in things get risky on the tough Manhattan streets and they find it harder to scounge places to stay. Despite their love, despair haunts them and when Tahir gets ill Hannah has to make tough decisions and trust strangers if she is to find a way for them to stay together.

Connelly and Mackie are impressive. He plays Tahir as a calm and compassionate man with a dark past, while Connelly has the somewhat showier role as an addict who uses drugs as a way of dealing with her issues. There is a niggling sense of ‘shabby chic’ about her – it is essentially hard to cover up her innate beauty – but Bettany puts her character through the wringer and she is great as a haunted woman.