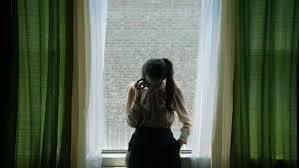 Am astutely cold and compelling psychological drama with sex at its core, writer/director Anja Marquardt’s debut film She’s Lost Control is an unglossy and taut film that reflects the emotional tension within its central character, a behavioral psychologist specialising in sexual surrogacy.

Brooke Bloom is impressive as a smart but oddly naïve woman who is drawn into a ‘relationship’ of sorts.

The title does give things away just a little, but the film is subtly unsettling and shot to reflect a rather bleak New York life. It is at heart a rather cold and perhaps inaccessible film, but there is much to admire in Marquardt’s control and precision as well as a well sustained lead performance by lead actress Brooke Bloom. After premiering in Berlin the film screened at SXSW.

Ronah (Bloom) takes on clients with intimacy issues and starts working with new client, hunk bearded Johnny (Marc Menchaca) veers between being nervous and hostile. He meetings with Johnny as intercut with scenes from her lonely life (taking hormone shots, Skype chats with her brother, legal issues over a water leak and quiet solitary meals) though as the meetings develop she starts to reveal more of herself, and eventually heads into darker territory.

Brooke Bloom is impressive as a smart but oddly naïve woman who is drawn into a ‘relationship’ of sorts, while Menchaca is equally impressive as the a troubled and fractured soul. The production values are all consistently high, with Marquardt making good use of the locations and her strong support cast.