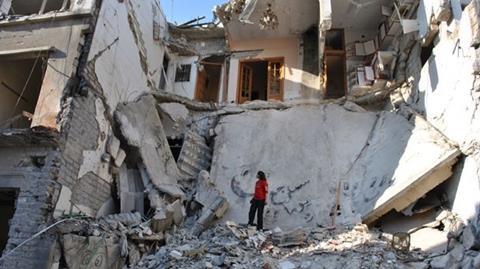 Silvered Water is a visual poem of raw pain from exiled Syrian director Ossama Mohammed, a young Kurdish woman under siege in Homs called “Simav” (“Silvered Water”), and 1001 images from mobile phones and cameras across the country. It is also a scream of grief.

Silvered Water starts out shakily, its perspective unclear and its footage grainy. The editing grows, however, to a force.

The agonising images onscreen – from beatings to executions to the bodies of dead children - should not, in theory, be surprising: we know, or ought to know, what is taking place there, particularly in Homs. People have given their lives so that we should. The pixelated precision of their savage reality takes your breath away, however.

Silvered Water is a modern-day Shoah; a film which should be seen – a silver bullet in the face of apathy and easy judgment.  The twisted hulk of Homs, its corpses lying in the streets, its animals mutilated, its orphaned children defenceless, is a terrible sight.  Footage of Vietnam changed the course of the war, and the bombed ruins of the Siege of Sarajevo prompted an international intervention. There is so much more now, and yet it seems to mean so much less. Through Simav’s lens, Homs looks like an Armageddon in our midst.

Ossama Mohammed has structured Silvered Water as an elegy as opposed to a documentary, although his ode has a tough uncompromising edge. Exiled in France, obsessed with cinema, he comes to believe that this footage being shot of the war is the beginning of a new film-making, that Syrians are re-imagining film itself. He calls them “a community of dead poets”.

Footage is shot at close-up range by captors and killers and victims alike (with varying degrees of clarity). When he is contacted by Wiam “Simav” Bedirxan, a young Kurdish woman in Homs who would like to become a film-maker, they begin an exchange: “If your camera was here, what would you be filming?” she asks.

The answer is death and despair. Mutilated bodies lie in blood and rain and filth, comrades risking their lives to try to hook their fallen back to dignity under sniper fire using wire and rope.  The film clearly has its genesis with the uprising, in the anti-Assad forces, but by the end Simav wonders if “I will die in a basement at the hands of a rebel leader.”

Silvered Water starts out shakily, its perspective unclear and its footage grainy. The editing grows, however, to a force: credited to Maisoun Asaad with additional editing by Dani Abo Louh and Lea Masson, it must have been a painful job to assemble. Sound editing from Raphael Girardot is nicely innovative – using natural sound but amplifying and reinforcing in ways that work to convey chaos, confusion, fear. Original music by Noma Omran is moving. Inter-titles don’t always feel comprehensible to a foreign audience, and may need further refining. This is a natural fit for all festival programming and human rights sidebars. Although it should be seen widely, it may be a difficult ask.