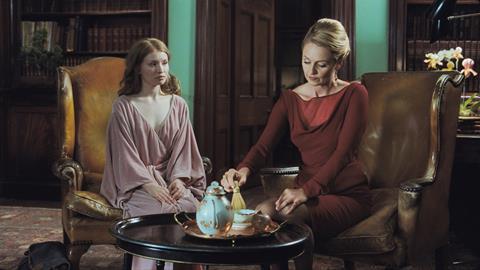 Passive, reckless, cunning: Lucy (Emily Browning) doesn’t really care what happens to her. She has sex at the flip of a coin. She lets the stakes rise until she agrees to be drugged for money and spend the night with old men pawing her. You won’t remember a thing, she is told. “You will wake feeling profoundly restored.”

Browning has gone the distance for her director and together, they have delivered something here that sometimes catches your breath.

Novelist Julia Leigh’s arresting foray into feature film-making is a flawed modern-day take on ancient, disturbing fables involving sex and the subconscious - there can, of course, be “no penetration” in the sleeping chamber. But while Sleeping Beauty boasts a memorable aesthetic from a notable new filmmaker and is an ambitiously provocative piece, it is also an uneven work that will divide the critics.

An Australian film with a distinctly European aesthetic, Sleeping Beauty’s frank sexual politics feel as if they couldn’t have come from anywhere else. It is wholly devoted to its central character - an inert, sullen beauty played by newcomer Browning - and a domineering design married to static, score-less framing.

Within this eerie combination, the film can be haunting. But elsewhere, Leigh stumbles. This is a carefully controlled film, redolent with symbolism and only enhanced by a crisp sound design. It is airless, frequently lifeless. Secondary characters are clumsily captured, and “Lucy” really only works when she’s forcing the audience to fill in her seductively blank face (more emotional scenes with troubled friend Birdmann are not successful and involve a wildlife sequence which is baffling in its inclusion).

Despite this, Sleeping Beauty should travel well, and attract mixed reviews but a strong following in the art-end of the market and on the festival circuit with its literary and feminist overtones and involving sexual agenda. While wider audiences may remain elusive for this challenging piece, it is very clear from her striking debut that Julia Leigh does not need a “Jane Campion presents” label to catch the audience’s eye.

Known for her 1999 novel The Hunter, in which a female character was also drawn to the healing qualities of drugged sleep, Leigh is economical in her brushstrokes, presenting university student Lucy as a puzzle the audience is drawn to solve. The opening sequence depicts her gagging on a rubber balloon which has been inserted down her throat as part of a presumably paid-for medical experiment. She has two jobs yet doesn’t pay her rent. She is probably unlikeable and responds recklessly to sexual situations. She is also escalating the stakes.

This combination ultimately leads Lucy to Clara (Blake), an ultra-lacquered mistress of fetishistic scenarios, who hires Lucy as a “silver service waitress” for A$250 an hour. She will, however, be required to perform pour her wine in provocative lingerie and lipstick the “colour of [her] labia” in a series of chilling tableaux which take place in Leigh’s dark, dark castle in the deep, deep woods.

Soon Clara engages Lucy for the sleeping chamber, where the men of the house take it in turns to visit her room. The first (Caroll) gives the film a narrative thrust, via clunkily-delivered literary references to Ingeborg Bachmann’s The 30th Year, while the second is a brutal sadist (Haywood). But is Sleeping Beauty about to wake up?

Julia Leigh is navigating some choppy waters between the controlled metaphors of her page and the need to let some life breathe in her cinema; while she may be asleep, her Beauty still needs some air. However, young actress Browning has gone the distance for her director and together, they have delivered something here that sometimes catches your breath.