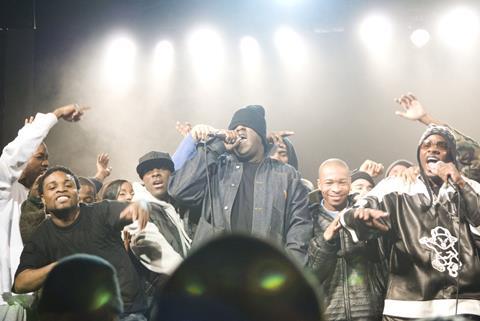 A bristling, slickly seductive portrait of The Notorious B.I.G., the 400-pound Brooklyn rapper whose velvety flow and unparalleled rhyme style left behind a legacy that reached mythic status after he was gunned down in 1997, Notorious works most directly as a biopic, capturing the tremendous charisma and contradictions of this garrulous man-child. But the film also paints on a broad social canvas, skillfully conveying in a doomed downward spiral how the murder of one man became a symbol of the violence plaguing many inner-city American neighbourhoods throughout the 1990s.

Music biopics like Ray and Walk the Line have hit it big at the box office in recent years, but rap quasi-biographies have performed much more erratically, with Eminem’s 8 Mile ($242 million worldwide) achieving a crossover, multicultural success that eluded 50 Cent’s Get Rich or Die Tryin’ ($46 million worldwide). The Notorious B.I.G. is a monumental figure in rap, though, and still beloved more than a decade since his passing, so cumulative worldwide nine-figure grosses seem certain, followed by a robust shelf life on home video.

Born Christopher Wallace in 1972, The Notorious B.I.G., aka Biggie Smalls (Woolard), grew up a Catholic School honour student, raised in Brooklyn by his single mother Voletta (Bassett), a Jamaican immigrant. Dropping out of school at 17, he turns to the flash and easy cash of drug-dealing, partially in order to help support a pregnant girlfriend.

Although he died in his 25th year, there’s a lot to Biggie’s story: important romantic relationships with three women; a stint in prison; a close escape on another gun charge; two kids; his mother’s bout with breast cancer; an important professional meeting with up-and-coming producer Sean ‘Puff Daddy’ Combs (Luke); and a friendship turned feud with fellow rapper Tupac Shakur (Mackie). The latter quarrel, on wax and in bullets, would pervade their personal and professional lives for almost two years before finally turning deadly for both men.

While the same distilled narrative hurdles that make up most tragic stories about the corrosive nature of fame (drugs, philandering, et al) are present here, director George Tillman Jr. (Men Of Honor) has a most ambitious backdrop in mind for his film. The film makes the link between straightened economic circumstances and personal ambition. When Biggie raps, it reflects his own contradictions and psychological turmoil, and also the dead-end desperation of his friends and an entire neglected sub-class.

And yet with all this ambition and scope, Notorious overall falls just short of true greatness. If the movie impressively doesn’t shy away from Biggie’s infidelities, and how he lazily falls back on his charm to try to escape judgement for his transgressions, some of its connective tissue feels too cute by half, with events that would have spanned months turned into overly pat dramatic scenes. Though often studded with amusing details - Voletta mistakes drugs for a plate of dried mashed potatoes; Biggie grunts ‘No!’ when his protege and lover Lil’ Kim (Naughton) exhorts him to try the missionary position during a bout of lovemaking - a bit more naturalistic drama between the characters would have been nice. Instead, the script sometimes feels compelled to underline its chief dramatic points.

It would obviously be impossible to tell this story without the music, which is well integrated throughout, not merely because of some fantastic concert sequences, but also because of the subcultural significance of something like Tupac Shakur’s Hit ‘Em Up, a furious ‘dis track’ which seemingly lit the fuse that cost both rappers their lives, and thus drives that narrative strand of Notorious.

Woolard, making his acting debut, delivers an exceptional performance. If his countenance is a bit different, the manner in which he carries his size is spot-on, and he nails Biggie’s vocal intonations - the throaty, swallowed nature of his talk, and reflexive laugh. In somewhat broader strokes, Luke captures the essence of Combs’ swaggering ambition. Mackie, though, has trouble conveying the wild-eyed, hair-trigger magnetism of Tupac - admittedly a difficult task.