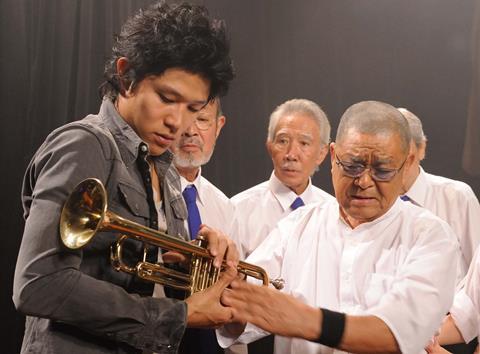 Music, illness and generational divides are the appropriately standard ingredients in Toshi Shioya’s movingly classy road-movie which manages to blend together jazz and leprosy to good effect. Perhaps too mainstream to feature on the festival circuit and not arty enough to appeal to art-house distributors, it does, though, have an enjoyable TV movie of the week quality.

There are no real surprises on this engaging road trip, thugh the relationship between Hiroto and Kenzaburo builds impressively.

Twenty-one year-old Hiroto (Ryouhei Suzuki) is crazy about jazz and lives with his parents and sister. He is amazed to hear that his grandfather is coming to visit…especially as he has always been told his grandfather had died some years before.

It turns out that Kenzaburo Kijima (veteran performer Ichiro Zaitsu) had contracted leprosy as a young man, and been separated from his son while his wife died shortly after giving birth. It was Japanese policy to isolate leprosy sufferers in sanitariums, even when a cure had been discovered.

As a young man Kenzaburo had played trumpet in a jazz band called the Cool Jazz Quintet, and Hiroto is so impressed with the old man’s abilities (one of the band’s albums is his favourite) that he agrees to take him on a road trip to reunite with the band he played with many years before and play their long-planned gig at the prestigious jazz club Sone.

There are no real surprises on this engaging road trip, thugh the relationship between Hiroto and Kenzaburo builds impressively. Ichiro Zaitsu is especially fine as the old man trying to bring his old band back together, though more frustratingly, against the odds there isn’t enough music as they head off on their journey – the final performance scenes as the elderly jazz players get together, though, is delightful.

It comes as no surprise when young talent Hiroto is giving his chance to play with the band…but then Swing Me Again – watchable though it is – is not a film of many surprises.