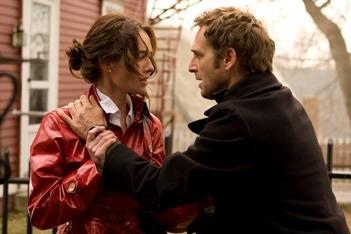 In Tell Tale, a heart transplanted into a young single father beats the drum for revenge on the murderers of the organ’s donor. Michael Cuesta goes up-market in the horror genre by expanding Edgar Allan Poe’s short story, The Tell-Tale Heart (1843), into a bloody race for justice before the transplanted heart gives out.

Tell Talecould just be the breakout picture for Cuesta, director of two respected independent films (L.I.E. and Twelve And Holding) and a known quantity in this genre with an ardent fanbase for his quirky TV serial killer series, Dexter, which could woo the horror audience. Attractive leads (Josh Lucas as the avenger and Lena Headey as a paediatrician) should rally the younger public that follows their work. Ridley and Tony Scott as producers should surely bring marketing heft.

Opening with blurry flashbacks and an insistent heartbeat, Tell Tale hones in on the quiet lives lived in Providence by transplant patient Terry Bernard (Lucas) and daughter Angie (Beatrice Miller) whose degenerative illness is treated by beautiful Dr. Elizabeth Clemson (Headey). The pulse quickens when Terry learns that his heart donor was brutally killed, along with his wife, in a burglary.

On the murderers’ trail, he kills a paramedic, and then seeks out a boozy detective (Brian Cox), who refuses help until Terry murders again. A parallel plot follows Terry’s romance with Dr. Clemson, which is threatened by his heart-driven revenge obsession.

The script by Dave Callaham (The Horseman, video game adaptation Doom) gives Terry’s revenge mission a scientific underpinning: He is so driven by his new heart that his blood type has changed to match the donor’s. If revenge weren’t enough justice, the trail of blood leads to a ring of murder-to-order organ traffickers.

While Cuesta’s earlier films (which he co-wrote) had touching idiosyncrasies — a likeable pedophile in L.I.E. and a guilt-ridden boy in Twelve and Holding – Tell Tale lacks humour and its well-meaning plot of single father seeking justice and love can occasionally come across as “family horror.”

Cuesta’s direction focuses on a man first shaken by involuntary violent spasms, who then surrenders to the murderous demands of the heart, while burning with a need – as in Poe’s story – to confess it all. Lucas is unsettling as the sick patient, just given a new life, who follows the beat of an insatiable organ.

Depicting a tale which also draws on Dostoyevsky’s Crime and Punishment alongside the Death Wish franchise, Cuesta’s Providence is flinty grey and brick Americana. Yet interiors (designed by Patti Podesta and filmed by Terry Stacey) are dark cavities, with red-purplish hues that echo the harvested organs in operating rooms and the bodies of Terry’s victims, whom he dispatches with surgical yet savage brevity.

Cuesta’s visual flourishes and strong acting by Lucas and Cox (with a vain ageing cop’s dyed hair and jewelry) upstages the television morality of Callaham’s story of justice exacted “from the heart.” A plot twist at the end saves it from any easy resolution, and reminds the audience that the heart, even in reasonable people, can have ominous secrets.