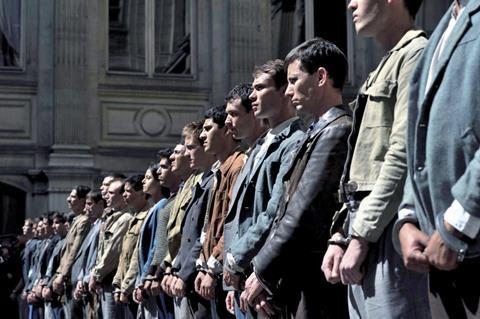 Timed for release at a point when France is battling issues of xenophobia, The Army Of Crime chronicles the famous “Red Poster” case in wartime France when a group of foreign partisans defied French apathy to form their own resistance against the Nazis. The story has been told before in Frank Cassenti’s 1976 L’Affiche Rouge, but Guediguian takes a different approach here.  Well-intentioned though it is, The Army of Crime’s excessive running time is an impediment, and its academic take means it will probably ultimately work better on the small screen.

With a large cast of name actors including Ariane Ascaride and Jean-Pierre Darroussin (both Guediguian veterans) and Virginie Ledoyen, coupled with a strong  technical team, this handsome production should also perform well for StudioCanal on DVD. Certainly, its theme deserves all the attention it can get.

Exiled Armenian poet Missak Manouchian (Abkarian), living in occupied Paris with his wife, Melinee (Ledoyen), takes charge of an underground resistance unit determined to fight the Nazi occupiers. Though a pacifist at heart, he feels impelled tot take action with a group of mostly young hotheads from all parts of the world, barely out of their teens. The Germans rely on the French police to quell the insurgents at first, but after the murder of a high-ranking general they ramp up the pressure and Manouchian and his people are caught and tortured.

Their case is put on the famous “Red Poster” distributed throughout France in which they are denounced as “The Army of Crime”. Needless to say, they are put on trial and found guilty without exception. Execution awaits.

Guediguian sticks to an episodic format throughout The Army of Crime, from the overlong introduction presenting his sprawling cast of characters, down to their final demise. This constant jumping from one mini-plot to another makes any kind of attachment to the characters difficult to achieve. He stays close to the actual events of the time, and if there is some minor retouching of the chronology, it does not affect the film’s overall impact.

Guediguian deals competently with several running themes, chief amongst them being the multi-ethnic nature of Manouchian’s group, which included Jews, Poles, Italians, Spaniards and of course Armenians. He also touches on the  Val d’hiver mass arrests of Jews who were later deported from Drancy to Auschwitz, and the French co-operation with the Nazis.

Despite or maybe because of the cast’s size it’s difficult to assess individual performances. In fact, Guediguian tries to throw so much into the pot there’s not enough time to shake the audience out of their every day lives. They will look, understand what it’s all about but never, for one second, forget they are in a movie house and the people up there are actors.