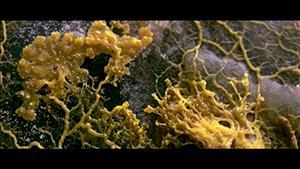 It might not have been the most obvious of choices for a genre festival, but Tim Grabham and Jasper Sharp’s absorbing and fascinating documentary The Creeping Garden, as well as having decidedly genre-sounding title, is an enthralling delve into the world of plasmodial slime moulds deserving to be served up at a series of other festivals.

The mood of the film is enhanced thanks to the soundtrack by sometime Sonic Youth member Jim O’Rourke, which helps enhance an aural background to often-hypnotic images.

The film, which had its world premiere at the Fantasia film festival in Montreal, is an often mesmerising look into mycological study, with a series of scientists, artists and researchers waxing lyrical about the joys of mycetazoa (slime moulds to you and I) and their many and wonderfully varied types.

Yes these moulds do have a visual similarity to the alien invader in that 1950s sci-fi classic The Blob, but that is where the fantasy link ends. There is debate as to whether slime moulds are animal, plant, fungi are something altogether different, with the film doing a wonderful job of balancing talking head interviews with quite stunning time lapse photography of these odd organisms as they grow, survive, feed and even work their way through mazes.

The mood of the film is enhanced thanks to the soundtrack by sometime Sonic Youth member Jim O’Rourke, which helps enhance an aural background to often-hypnotic images.

Of course, even the experts are barely scratching the surface of what is known about slime moulds, which is what makes their enthusiasm all the more infectious and inspiring. Beautifully shot by Tim Grabham (an editor and cinematographer, who made documentary KanZeOn) and Jasper Sharp (a critic and expert on Japanese cinema), the film is both complex and accessible, and both strange and intriguing. A unique documentary to be sure.