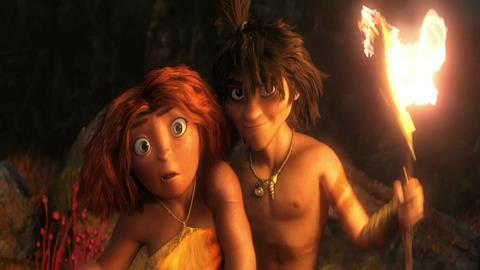 With little direct competition opening, The Croods recorded a comfortable third straight weekend as the UK’s number one film.

Only Les Misérables has gone four consecutive weeks as the UK’s number one this year and with the arrival of Oblivion this week, it seems unlikely that The Croods will be able to repeat the feat of Tom Hooper’s musical.

Holding firm in second was Paramount’s G.I. Joe: Retaliation as it battled its way to an additional $1.6m (£1.06m).

The debut means Spring Breakers is already Korine’s highest-ever grosser in the UK - unsurprising given that Korine’s previous widest release belonged to Gummo’s four sites - and it also ranks as the sixth biggest UK opening for Vertigo, narrowly behind Monsters’ $534,000 (£348,577) debut from 164 sites.

Curzon Film World’s A Late Quartet debuted to $171,000 (£111,289), including previews, from 49 screens for a healthy average of $3,490 (£2,271), an auspicious start for the rebranded Curzon Artificial Eye label which will release “commercially driven English language films”, while Artificial Eye will focus on independent, art-house and foreign language distribution.

This week sees saturation releases for Universal’s Oblivion (opens April 10) and Entertainment’s Scary Movie 5, while StudioCanal’s The Place Beyond the Pines receives a wide release of 114 cinemas nationwide. Metrodome’s The Gatekeepers and Eureka’s Simon Killer are among the films receiving a limited release.