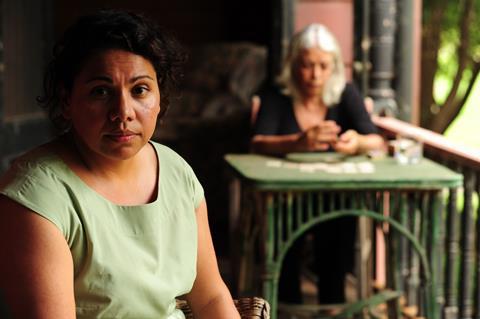 Your response to this hard-to-classify documentary/storytelling/entertainment will be mainly determined by whether or not you believe in ghosts and apparitions — the continuation of sentient life after death. Celebrated aboriginal director and cinematographer Warwick Thornton (Samson & Delilah) sits on the pro-spooks side of the fence.

For Thornton, and for the many (mainly indigenous) people who responded to his published advertisement for ‘true ghost stories’, death is not The End.

Others are unlikely to have their prejudices challenged by this succession of ghost stories, mainly delivered as monologues direct to camera by actors striving to either chill or give comfort. The film screened at the Adelaide Film Ferstival. Film festivals will be interested and an Australian arthouse rollout begins in late November, but local audiences will most likely see this oddity via ABC TV, which has an investment interest.

For Thornton, and for the many (mainly indigenous) people who responded to his published advertisement for ‘true ghost stories’, death is not The End. He made sound-only recordings of his favourite stories and then cast mostly well-known Aussie actors to perform the resulting texts. It’s an odd concept; for the more well known the actor (Bryan Brown, Deborah Mailman, Claudia Karvan, etc) the harder it is to believe in the flimsy evidence for each story’s wandering spirit.

Without visual clues to the psychological background of the people whose tales are being told, we have to take their revisited narratives on trust. And there are few concessions: no preliminary explanations, the pace is slow, many to-camera shots are held for a long time.

One section is definitely ghost-ridden. Poet Romaine Moreton has researched the unlovely history of the Australian Institute of Anatomy in Canberra (1931-84) and her passionate, self-narrated story is based on photographic evidence of aboriginal skeletons in glass cases, and on archive film of bewildered indigenous people having the exact size of their craniums measured and recorded. Many uneasy spirits were created there, that’s for sure.