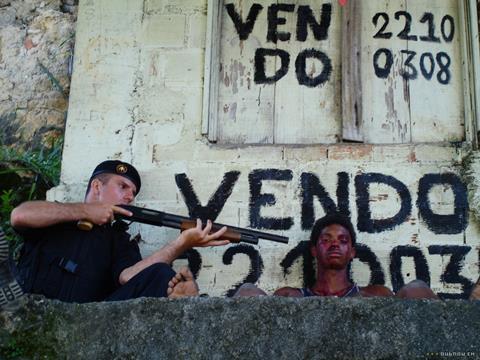 So hard-boiled it’s practically cast in iron, Brazilian crime saga Elite Squad makes even the toughest recent US cop dramas look like Hilary Duff romcoms. Hyper-macho, with a steely ring of well-researched realism, the first fiction venture by Jose Padilha - who scored with the 2002 hostage-crisis documentary Bus 174 - is pitched somewhere between the full-on flash of Brazilian hit City Of God and the narrative complexity of TV’s The Wire.

Some of the stylistic elements may feel a little over-familiar by now, and the film lacks the brio and sheer sexiness of City Of God, but The Elite Squad is intelligent, energetic, and immensely watchable.

The film has been massively successful in Brazil (where it sold 2.4m tickets last year) and if astutely marketed by the Weinstein Company, its international prospects could go gangbusters - literally.

Set in Rio in 1997, the story begins with a police stakeout of a funk party in the slums, which degenerates into a bloody shootout. Narrator is Beto Nascimento (Moura), a captain with Brazil’s autonomous, hard-as-nails BOPE, an elite squad of black-bereted commandos whose skull-and-crossbones insignia testifies to their shoot-first-take-no-prisoners approach.

Nascimento’s matter-of-fact, Mickey Spillanesque voice-over runs through the film, narrating the before and after of the night’s events.

The film tracks Nascimento’s attempt to find his successor in BOPE, so that the officer - increasingly cracking under stress - can settle down with his wife and new baby.

The film’s first part narrates the progress of two new police recruits, both bristling with integrity and yet to be exposed to the endemic corruption on which, the film argues, Rio’s police service functions.

Neto (Junqueira) is impulsive, while his while his best friend Matias (Ramiro) is an intellectual with aspirations to be a lawyer.

He enrolls at law school, without telling his fellow students he’s a cop, and dates fellow student Maria (Machado). She helps run a social work bureau in a tough slum, but inevitably has to compromise with the area’s real lawmaker, drug lord Baiano (Lago).

The first hour follows these figures through a labyrinth of corruption, compromise and backhanding. Detailed and - to all appearances - researched to the hilt, Elite Squad paints a bleak picture of Brazilian law and order against the background of Nascimento’s mission - to clean up a slum area in the period leading up to a papal visit.

Nervy editing, restless hand-held camera and the sort of hot earthy tones familiar since City Of God and Amores Perros make for a familiar mix, functional rather than innovative but never less than effective.

Arguably, the film could be read as a nihilistic, even reactionary statement - to wit, that in a corrupt world, brute integrity is the only response. But you rarely feel that Padilha and his collaborators are making this stuff up: indeed, co-writer Rodrigo Pimentel was himself a BOPE captain.